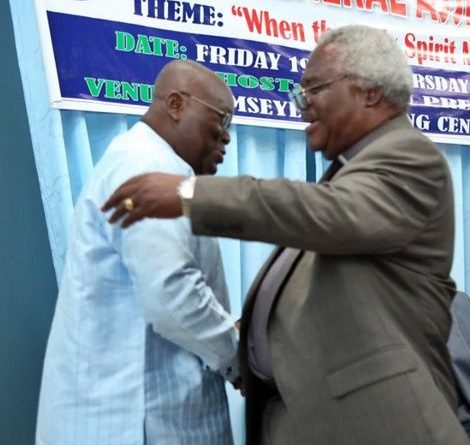 The National Democratic Congress (NDC) has challenged Rev. Professor Emmanuel Martey to substantiate his US$100,000.00 bribery allegations. The immediate past moderator of the Presbyterian Church of Ghana at a news conference on Tuesday, 30 August 2016 revealed that some politicians attempted to bribe him with US$100,000.00 to gag him. “Politicians have tried all means to muzzle me, to get me but they can’t, they come with bribes, fat envelopes, $100, 000…I want everybody to listen that politicians came to my house with $100, 000 and also with the promises that if you keep quiet we will give you a house at Trasaaco with swimming pool. “We will give you Four Wheel drive [vehicle] but you know what, these people were lucky that I do not have big dogs in my house else I would have released the dogs for them to bite them,” he alleged. “They have tried all means to muzzle me but they couldn’t and I tell you they can’t,” added Prof. Martey. Even though, Prof Martey felt short of mentioning any particular politician; it is believed that he was referring to the NDC. As a result, the party’s Deputy General Secretary, George Lawson has urged the controversial preacher to authenticate his allegations by mentioning the names of the said politicians. Mr. Lawson argued that if the allegations by Prof. Martey are really true, why did he fail to mention their names asking “If you are a man of God and politicians come trapping you, can’t you mention their names?” Speaking on Starr Today on Tuesday, Mr. Lawson contended that Prof Martey’s wild claims are just aimed at mudslinging the NDC. “It is only to drag NDC’s name into the mud,” said Mr. Lawson adding that no astute politician will behave like the people Prof. Marty was talking about. Meanwhile, the former Public Relations Officer (PRO) of the Presbyterian Church of Ghana, Dr. Emmanuel Osei Acheampong has disclosed that Prof. Martey lied during the press conference saying the latter took the said money and vehicle from some politicians. “Today marks a sad day for the Christian religion, the statement from Prof. Martey is one of the most unfortunate that I have heard in recent times, a leader should have ethical communication which will not escalate into violence. Jesus never talked this way. “Prof Martey is speaking in the opposite way, when he came into office, he presented to us a statement from one of the strongest political party, when we kicked against it, he sacked me In July 28, 2013, around 8:15pm, he invited me to the office of one of the leading opposition parties not the ruling government, when I got there he had received the 100,000 dollars and a V8 he is claiming to have rejected. And he gave me 50,000 dollars, I am speaking on authority that he received the money, alleged Dr. Osei Tuesday in an interview with Kasapa News’ Akwasi Nsiah.