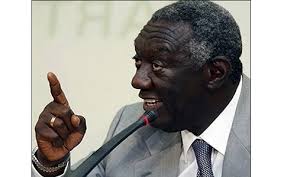 Former President John Agyekum Kufuor has called on the Electoral Commission (EC) to be truly independent in the discharge of its mandate as a referee in the November 7 polls. Officials of the Commission, he said, should be guided by the truth, patriotism and the fear of God, to ensure a peaceful election, bearing in mind that they are citizens as well as employees, accountable to the country. Mr Kufuor said this in an interview with the Ghana News Agency when the ‘On Guard for Humanity’, a Canada-based non-profit charity organization, of which the John Agyekum Kuffour (JAK) Foundation is an honorary member, donated 500 boxes of packaged water to the inmates of the Egyeikrom Refugees Camp in the Central Region. Urging Government to see itself in a position of service and abide by laid down rules to foster peace in the country, he also appealed to Ghanaians to be calm and exercise their franchise peacefully. The donation was in line with a collaborative mission of the charity and the JAK Foundation geared towards the distribution of safe drinking water to communities experiencing water crisis across the world. The water, packaged in a total of 4,000 one litre bio-degradable paperboard cartons, was made from accumulated ice from Iceland, near the North Pole, where it is claimed the purest source of water in the world exists. He said the idea to pack the water, conceived some few years back through his interaction with the charity, was necessitated by the fact that the accumulated ice was melting away into the sea and going waste due to climate change effects while some people were in need of water. Commiserating with refugees, Mr Kufuor said it was difficult being in such a position and at the mercy of another country adding that irrespective of reliefs provided, life may not be as comfortable as experienced in one’s own country. He said the two organizations shared the belief that many diseases on the continent were caused by polluted water hence the initiative to supply water. Mr Albert de Sousa Costa, President and Chief Executive Officer of the charity, said the charity worked across the globe to ensure sustainable, long term solutions to help communities vulnerable to natural disasters, disease, poverty and displacement as a result of war and internal conflicts. In Ghana, he said, its immediate mission was to make available the means to respond at short notice, safe clean drinking water following a major natural disaster and that it would continue to explore other areas of service to the community and this includes health service and initiating new skills training programmes. Mr Dayoro Jean Michel, Camp Chairman, expressed gratitude to the former President and the charity for their benevolence and appealed for livelihood empowerment training programmes to enable them work and provide for themselves. The Egyeikrom Refugee camp located in the Komenda-Edina-Eguafo-Abrem Municipality was established by Government of Ghana and the United Nations High Commissioner for Refugees (UNCHR) for Cote D’Ivoire nationals in July 2011. It currently has 2,244 residents. Source: GNA