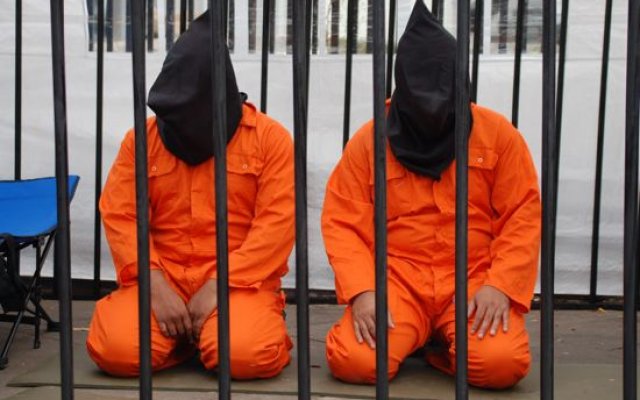 By accepting to house, for two years, two ex-convicts of Guantanamo Bay, on behalf of the United States of America, Ghana has imported terrorist groups al-Qaeda and the Taliban to its fold, Ranking Member on Parliament’s Foreign Affairs Committee, Isaac Osei, has said.The Subin MP and former Ambassador to the U.K. said,  Ghana, by its action, is willingly courting terrorist groups.He wondered why Ghana will accept the two high-risk terror suspects, whom the United States of America had rejected. “The government must come clean on the transfer. What agreements were reached between Ghana and the United States? I’m worried that they never told anyone. Which country has better intelligence than the U.S., so, if America has rejected these terror suspects, what business has Ghana accommodating them?” Mr Osei asked.“You can accept things from your friend, but not to your detriment,” Mr Osei said, adding: “We have so many problems already, so, why import al-Qaeda and the Taliban here to compound our woes?”Meanwhile a former deputy Minister of the Interior, Mr K.T. Hammond, has said Ghana must immediately send back to Guantanamo Bay, Mahmud Umar Muhammad Bin Atef and Khalid Muhammad Salih Al-Dhuby because their presence in the country is a security threat.“My heart is completely broken…I am devastated. These are infested maggots. This is a poisoned chalice and it is a very dangerous situation that we find ourselves in now,” Mr Hammond told Richard Sky on Eyewitness News Thursday.“I am sad… If a country of America’s effort and might could not handle a situation of this nature and they want to distribute them among the poor countries of the world, like Ghana, isn’t that in itself a cause for serious concern?” Mr Hammond asked, adding: “These guys were not taken from a tea party in Afghanistan, they were taken out of a war theatre, these guys are committed jihadists, they are terrorists…if America cannot track these guys from where they are, how we are expected in Ghana to be able to contain these murderers?“We are in the process of creating a Frankenstein monster and if it becomes a full-grown one, what do we do? I am so afraid. I do not understand why the government did not inform the good people of Ghana in advance…this is not a refugee situation…I’m so sure that parliament is going to resolve that it was wrong and these guys should be sent back. I mean I don’t see why they can’t go back to their country, who is persecuting them…we are afraid of these terrorists,” Mr Hammond said.Mr Hammond is not the only prominent Ghanaian to have expressed apprehension about the transfer of the two to Ghana following a deal between the African country and the US.International relations expert Dr Vladimir Antwi-Danso, has said it could open up the country to security threats. Also, a former presidential advisor in the Kufuor administration, Vicky Bright, has said Ghana, by accepting the detainees, was importing trouble to its shores.However, security analyst Irbad Ibrahim has said: “These two Yemeni guys, I believe, are not top-tier al-Qaeda commanders…“There’s no cause for alarm”, Mr Ibrahim told Kwadwo Asare-Baffuor Asare on Asempa FM’s Ekosii Sen political talk show on Thursday, January 7.“Let’s save government some flak,” he said, noting that the two pose no security threat to Ghana.Most of the time, the security threat, he said, “will come in the form of your military engagement in the theatre of warfare.”In his view, Ghana’s decision to accept the detainees will rather “enhance our reputation in the eyes of the international community,” adding that “there are goodies that come with this…there’s no cause for alarm at all, if anything at all, this is an avenue for us to consolidate the bilateral ties between us.

I think we are making a mountain out of a molehill. This is a foreign policy decision, I think, as Ghanaians, we shouldn’t fret over. I don’t think it should give us sleepless nights as a country. This will not put Ghana on the radar of al-Qaida or Taliban or Boko Haram.”Mr Ibrahim’s concerns strike a chord with a similar sentiment expressed by Chairman of Ghana’s Prisons Council, Rev. Stephen Wengam.“I think it’s a good move,” Rev. Wengam told Radio XYZ’s breakfast show hosted by Kweku Vandapaline on Thursday, January 7, 2016.“I think that we pride ourselves as being a hospitable country and I think that such moves go a long way to improve our image in the international community. That is why we will need more resources.“I will only plead with government to use this as a bait to get the international community to commit more resources to help us improve conditions in our prisons…maybe through this, we can get more resources because the international community will have to come to our aid and you don’t need to have everything before you can help somebody and we are a very religious country and who knows, God may look at that.

This may be some of the reasons why we don’t encounter wars in this country… therefore, I will say that we should not be scared, we should not be perturbed,” Rev. Wengam added.According to Rev. Wengam: “Don’t forget we belong to the international community and what is happening in Syria and others could happen to Ghana …and we’ve done it before when the conflict happened in Liberia and other places …we opened our borders. I am yet to get the very details but what I know is that I think they put in place security measures to ensure that those who are admitted into Ghana don’t cause a security threat to us.”The two ex-detainees left for Ghana Wednesday, January 6, 2016. Their transfer is the first of an expected 17 such transfers approved for January, the Pentagon announced Wednesday.Mahmud Umar Muhammad Bin Atef and Khalid Muhammad Salih Al-Dhuby were held for more than 13 years at the detention facility in Cuba. They were unanimously approved for transfer by the interagency Guantanamo Review Task Force, according to a Pentagon statement issued Wednesday afternoon.The task force is comprised of six departments and agencies charged with determining which detainees can be safely transferred from the facility.“The United States is grateful to the Government of Ghana for its humanitarian gesture and willingness to support ongoing U.S. efforts to close the Guantanamo Bay detention facility,” the statement read.“The United States coordinated with the Government of Ghana to ensure these transfers took place consistent with appropriate security and humane treatment measures,” it added.Guantanamo Bay now holds 105 detainees. Fifty-nine are not eligible for transfer for security reasons.Defence Secretary Ash Carter last month notified Congress that 17 detainees would be transferred from the facility to other nations throughout January. Fifteen of them were transferred last year.Bin Atef, according to the New York Times Guantanamo Docket, was born in 1979 in Saudi Arabia and fought with Osama Bin Laden’s 55th Arab Brigade and was an admitted member of the Taliban. He was captured in Afghanistan and transferred to U.S. custody about January 2002 after engaging in combat against the American-led coalition.Like Bin Atef, Salih Al-Dhuby was born in Saudi Arabia and claims Yemeni citizenship, according to the New York Times Guantanamo Docket. The suspected Al-Qaida member was born in 1981 and was captured by Afghan forces in December 2001 following an explosion near Tora Bora. He’s been held in Guantanamo since May 2002.President Barack Obama has promised to close the Guantanamo Bay facility since he was a candidate in 2008 but has struggled to do so amid Congressional opposition to move detainees to a prison in the United States.The 2016 National Defence Authorisation Act, passed in November, banned moving any detainees to the United States. Obama announced at the time he opposed that provision, but he signed the bill anyway.