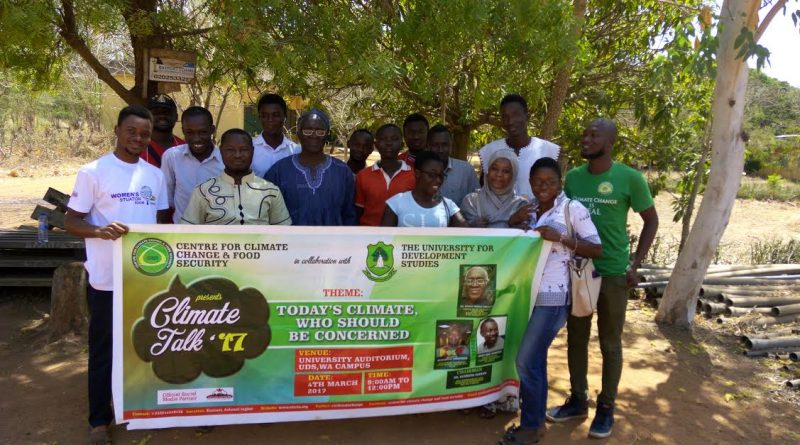 Events Latest News
March 10, 2017March 22, 2017 Isaac J Bediako 0 Comment University for Development Studies UDS., Wa campus in the Upper West Region, waste of food in Ghana
A project to minimize the misuse and waste of food in Ghana has been launched at the University for Development Studies UDS, Wa campus in the Upper West Region.
Dubbed “Campaign Against Food Waste and Overeating”, the project is to encourage Ghanaians to make judicious use of available food at their disposal.
Though there is no readily available statistics, it is believed that most Ghanaians waste more food than they consume.
The two key components of the project is to reduce food waste and over-eating which contribute to about 20 percent of the world food being lost.
At the launch of the project,  Executive Director of the Centre for Climate Change and Food Security (CCCFS), Mahmud Mohammed-Nurudeen, enjoined the students to eat less animal products, and help reduce the global growing trend of food insecurity.
He said it is important students play a pivotal role in the prevention of food waste to help prevent damage to the environment.
“If we continue to throw away food and litter around, then we are just preparing a dangerous environment for the future generations” he said.
The project is also part of efforts to reduce the billions of tonnes of food lost to ensure everyone has access to a safe, affordable and nutritious diet.
According to scientists at the University of Edinburgh, the world population consumes around 10 per cent more food than it needs, while almost nine per cent is thrown away or left to spoil.
The researchers at the University examined ten key stages in the global food system including food consumption as well as the growing and harvesting of crops to quantify the extent of losses.
According to the research, almost half of harvested crops  or 2.1 billion tonnes are lost through over-consumption, consumer waste and inefficiencies in production processes.
They found out that, almost 20 per cent of the food made available to consumers is lost through over-eating or waste.
Livestock production is the least efficient process, with losses of 78 per cent or 840 million tonnes, the team found. Some 1.08 billion tonnes of harvested crops are used to produce 240 million tonnes of edible animal products including meat, milk and eggs.
This stage alone accounts for 40 per cent of all losses of harvested crops, researchers say.
Dr. Peter Alexander, of the University of Edinburgh’s School of GeoSciences and Scotland’s Rural College, who led the study, said: “Reducing losses from the global food system would improve food security and help prevent environmental harm. Until now, it was not known how over-eating impacts on the system. Not only is it harmful to health, we found that over-eating is bad for the environment and impairs food security.”
Ghana’s Centre for Climate Change and Food Security has therefore taken upon itself to educate young Ghanaians, especially students, on the need to avoid food waste and overeating.
The project was launched as part of the Centre’s seminar on the theme: “Today’s climate,  who should be concerned?”
Ghana Bureau Chief for ClimateReporters, Kofi Adu Domfeh also encouraged students to show more concern in the protection of the environment.
He said the students can be agents for change in educating Ghanaians about the effects of the changing climate.
He cited an instant where a farmer at Atebubu in the Brong Ahafo region lost all his crops due to prolonged drought.
Mr. Domfeh also challenged the students to begin a campus campaign on environmental tidiness.
Centre for climate change and food security is a Ghanaian based nongovernmental organisation poised to recommending and implementing policies to safeguard the environment and protect farmers livelihoods.
The centre also embarks on research works that seek to address issues of climate change, food security, agribusiness among others.