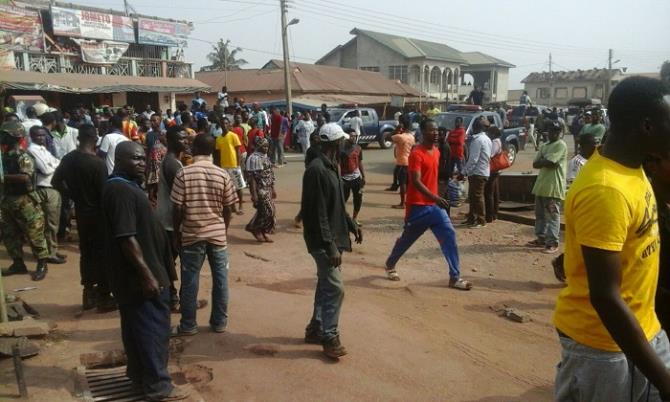 The Youth of Wenchi  Wenesday embarked on a peaceful demonstration against their Municipal Chief Executive Honourable Hakim Dauda on what they termed as total disappointment to the people of the Wenchi Municipality since assuming office in 2012.

The irate youths are therefore calling on his Excellency y John Dramni Mahama to sack the MCE with immediate effect following his inability to transform Wenchi Municipality and its environs hence their humble call on the government to replace him.

The demonstration dubbed ‘’MCE Must go’’ controlled by the police had scores of the youth marching from the Wenchi Round About straight to the Municipal Assembly with inscriptions ‘’MCE must Go’’ to present their petition to the Assembly,

One of the demonstrators who mentioned his name as Kwesi speaking to ghnewsnow.com stressed that the MCE since his appointment in 2012 has not done anything beneficial to the people of Wenchi and believes it would be unwise for the Government to sit there quietly ensuring he finishes his term of office.

According to him, the youth would advice themselves in the December poll s should the President allow the honourable MCE to continue enjoying his post as the MCE in the Wenchi Municipality.

‘’Maybe President Mahama wants to lose this year’s election if not that I don’t really see why he should fail to listen to our daily cry. We ‘re simply tired of him and want the Government to do something immediately to kick him out of office or else we the youth here will advice ourselves seriously before the December 7 elections’’.

‘’We have given him an ample time with the hope that he would listen to our cry and work effectively to meet our little demands yet he has always remained unperturbed with our unpleasant situations therefore we think the time has come for us as youth of Wenchi to officially register our displeasure to him hence our decision to embark on this demonstration’’.

The furious demonstrator added’’ It is very sad to see our Round About at a very deplorable state, full of pot holes, no better water for us to drink and you claim you are working as the MCE of Wenchi , no we won’t accept that, now it is either the Presidents listens to us by getting as a very competent Chief Executive of loses our votes in the December polls.