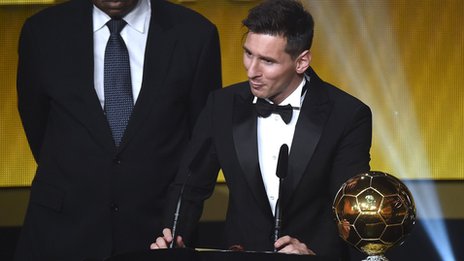 It is the Argentina international’s fifth World Player of the Year title – more than any other player in history – and thwarts Ronaldo’s quest to tie his haul of gongs, with the Madrid star having picked up the award in each of the last two seasons.

“It’s a very special moment for me, to be back here on this stage winning another Ballon d’Or after being in the audience watching Cristiano win for two years,” Messi said upon receiving his award.

“It’s incredible that it’s my fifth, it’s much more than anything I dreamed of as a kid.

“I want to thank all those who voted for me first of all. I also want to thank obviously my team-mates, as I always say without them none of this would ever have been possible.

“And lastly I want to thank football for everything it has brought me – both the bad and the good – because it has made me grow and learn always.”

The Ballon d’Or award caps yet another remarkable year for Messi, who secured five trophies and a famous treble with Barcelona in a dominant 2015, ending the Catalan club’s four-year wait for another Champions League victory – his fourth title in Europe’s premier club competition.

Messi scored a remarkable 52 goals for club and country across the calendar year – five less than Ronaldo – as well as contributing 26 assists in 61 appearances, scoring or assisting every 0.78 games.

The 27-year-old first won the Ballon d’Or in 2009, before it merged with Fifa’s World Player of the Year award, and won it every year afterwards until 2012 when his stranglehold on the award was finally broken by Ronaldo.