Officials of the Ghana Football Association (GFA) including the President Kwesi Nyantakyi have reportedly been exposed for agreeing to partake in a deal which would have seen the Ghana Black Stars playing a series of fixed matches. Other officials fingered in the abortive deal include one Christopher Forsythe and Obed Nketiah who is also the Chief Executive of Berekum Chelsea and a member of the Ghana U-20 management team.

An undercover investigation by the UK newspaper The Telegraph and Channel 4’s Dispatches programme alleges that the Mr. Nyantakyi agreed for the team to play in international matches controlled by match fixers in return for a sum of money.

After receiving information that some football associations were conniving with some known match-fixers to rig scores in international games, the Telegraph and Channel 4’s Dispatches launched a six-month undercover investigation to fish out the culprits.

Investigative reporters from The Telegraph and a former FIFA investigator say they posed as representatives of an investment company that wanted to “sponsor” games.

It is alleged Mr. Nyantakyi then met the undercover reporter and investigator, along with Mr. Forsythe and Mr Nketiah, and agreed a contract which stipulated terms for the Black Stars playing in rigged matches, in return for payment. The contract stated that each match thus organized would cost $170,000 and that match officials would be appointed by a bogus investment firm in breach of Fifa rules.

Unknown to the GFA officials however, the meeting was being secretly filmed and the video in which the ‘sponsors’ were discussing contract terms has gone viral. In the video, Messrs. Forsythe and Nketiah could be heard bragging that they could help fix the matches.

“You [the company] will always have to come to us and say how you want it to go…the result,” said Mr Forsythe. “That’s why we will get the officials that we have greased their palms, so they will do it. If we bring in our own officials to do the match…You’re making your money.”

He said that match fixing was a common feature in the modern game in and that he could even arrange rigged matches between Ghana and British teams. “Even in England it does happen,” he said. “We will always choose associations or countries that we think we can corrupt their officials for all our matches”, he added.

According to the report, the 2 men then introduced the undercover reporters to Kwesi Nyantakyi, at a five-star hotel in Miami earlier this month shortly before the Black Stars played South Korea in a pre World Cup friendly.

During the meeting in Florida, Mr. Nyantakyi allegedly agreed to terms of the contract which spelt out that the Company will appoint and pay for the cost of the referees/match officials in consultation with agreed FIFA Member associations, in direct defiance of the rules that prohibit third parties from appointing officials in FIFA games.
The report further alleges that during the meeting, the the GFA president suggested that the investment company put on two matches after the World Cup to prove that they were capable of organizing games.

“So why don’t you arrange matches?” said Mr Nyantakyi. “Let’s say there should be an experimental period for us to see how we do your work? There is an opportunity in August, and then in December, but I don’t know about that. But these months appear to be the only time that we can have any opportunity to play friendly games.”
he added.

When a reporter asked if the president was happy with the contract, as long as it reflected the experimental period he had requested, he replied, “Yeah these are the issues that I’ve got with it.”

So far it has not been revealed that any of the players or the coach Kwesi Appiah are involved in this scandal.

The revelations come in a tie where there are several accusations and reports of match fixing.

Last month Ghana’s neighbors Nigeria were in the news over attempts to fix a game with Scotland played in London.

It has also been alleged that Qatari officials paid hefty sums of money to FA’s and FIFA officials especially in Africa to cajole them into voting for the Middle-Eastern country to host the 2022 World Cup.

Meanwhile the 2 men; Forsythe and Nketiah have denied the allegations.“These are false allegations and I will never in my life do such a thing” Mr Nketiah said.

As part of a statement, Mr Forsythe also said: “To be frank everything I told you about the match fixing was a figment of my own imagination because I am so naive that I don’t even know how matches are done. They were promises just to be able to get something off you.”

On his part, Mr Nyantakyi said that he had not read the contract and he did not know about any deal.

The Ghanaian FA has since announced that it has asked the Ghana Police Service to investigate Mr Forsythe and Mr Nketiah for “misrepresenting the GFA with an attempt to defraud”. 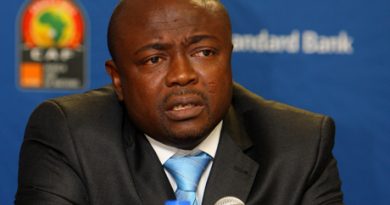