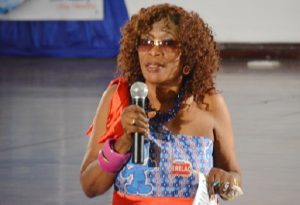 The hostess of the defunct popular women TV programme, Mmaa Nkommo, Madam Afia Ansaa Ampene, and her son have been dragged before the Accra Circuit Court for allegedly defrauding a woman of GH¢265,988.

In 2016, the TV host and her son, Stephen Kwabena, were alleged to have collected goods from a dealer of Nestle and Unilever products to the tune of GH¢265,988, with the promise of selling the items and returning the proceeds.

The two have, however, pleaded not guilty to two counts of conspiracy to commit crime and defrauding by false pretence.

At yesterday’s sitting, counsel for the two, Mr Kofi Bonnie, pleaded with the court to grant his clients bail because they had made plans to pay the said amount.

According to him, his clients had been unable to pay the money because their business partners owed them.

“It is not my clients’ intention not to pay the money. Their business partners have not been faithful. But they will take steps to settle the amount,’’ he said.

Counsel further argued that his clients were gainfully employed and had a fixed place of abode.

“My clients are also not flight risk and will, therefore, not attempt to jump bail,’’ he argued.

In view of counsel’s argument, the court, presided over by Mrs Ruby Naa Adjeley Quaison, admitted Madam Ampene and her son to bail in the sum of GH¢205,900, with three sureties each.

One of the sureties, according to the court, must be a public servant not earning less than GH¢1,000 a month.

“Valid photo identifications of the sureties must also be produced,’’ the court ordered.

Prosecuting, Chief Inspector Matthew Acheampong told the court that the complainant is the managing director of a trading company that deals in Nestle and Unilever products.

The two, he said, promised to deliver the goods to a non-governmental organisation (NGO) and later return the proceeds to the dealer.

According to the prosecutor, Madam Ampene issued two post-dated cheques with the face value of GH¢60,000 and GH¢40,000, but the GH¢60,000 cheque was rejected by the bank.

“Ampene later went to the company and convinced the accountant, collected the bounced cheque and deposited GH¢10,000 and promised to bring the balance of GH¢215,888 by the close of banking hours that day,’’ he said.

Mr Acheampong said Madam Ampene and her son later vacated their house at New Sabrepo, near the Michel Camp, and went into hiding.

“All efforts by the managing director to trace their whereabouts proved futile. During investigations by the police, Madam Ampene was arrested from her hideout in Tema, while her son was arrested at a hotel at Haatso,’’ he added.

Upon their arrest, the prosecutor added, the two refunded GH¢10,000 of the amount.