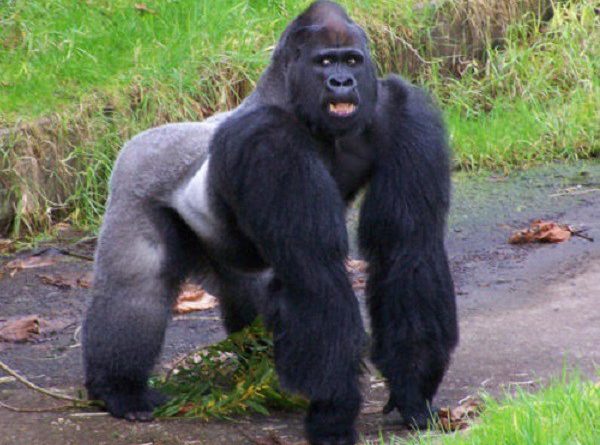 A search party has continued its second day search for a gorilla at Agyabiko, a farming community close the Ghanaian Ivory Coast border near Sampa in the Jaman North District of the Brong Ahafo Region after it reportedly seized 2-year old girl from her mother.

A resident of the area, who confirmed the incident  said 35-year old Adwoa Duku went to the farm with the little girl to fetch firewood when the incident occurred.

He revealed that on arrival at the farm, she laid the little girl under a tree while she went to cut firewood but moments later she heard screams from the child  and  rushed to feed her thinking she was hungry.

On reaching under the tree where the child had been laid to rest, Adwoa Duku spotted the huge gorilla that had taken the child and climb on top of one of the trees in the farm.

“According to the woman, she tried to save her child but the gorilla tossed her to another prompting the poor woman to rush home and report to community members. They massed up with guns and rushed to the farm but the gorilla had disappeared. As we speak the search party is returning to the bush today to search for the child”, he revealed.

An opinion leader and assemblyman for the area Agya Yaw corroborated the story and revealed that this is not the first time they have seen the mammal in the community but it is however the first time it has caused them pain.

“We are scared of going to our farms and leaving our children behind. From the reports we get, it is a band of gorillas that are in the area because they tormented some communities days ago. We have adopted a shoot to kill policy just to protect lives”, he emphasized.