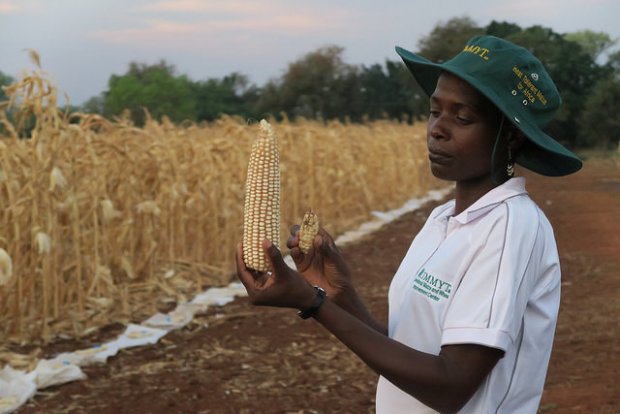 In years gone by, had you visited Zaka in the Masvingo Province of Zimbabwe in October, the ground would already be sown with maize, ready for the onset of the rainy season. But in recent years, temperatures have been rising, and the seasons have been shifting. Now, despite the time of year, the rain has not fallen and farmers are only just beginning to prepare the land for planting.

Zaka is hot and dry, and receives an average rainfall of 600mm or less. Temperatures regularly hit above 30 degrees, and can remain there until 9pm at night. Last year, the region experienced the worst drought in decades, brought on by the El Niño weather phenomenon. Local farmers were hit hard.

“It was one of the worst droughts we have ever seen,” comments 66-year-old farmer Amon Makonese. “I planted three hectares of maize, but it all wilted. I got only half a tonne of maize – I didn’t have enough to sell. The drought cut off my means of survival.”

Work underway at the International Maize and Wheat Improvement Center in Zimbabwe (CIMMYT), is seeking to ensure the widespread hunger in the country caused by the 2015/6 drought is not repeated, by breeding a heat- and drought-tolerant maize variety that can still grow in extreme temperatures.

“El Niño had a devastating impact on agricultural production in southern Africa, and high temperatures have been one of the biggest yield reducing factors associated with El Niño in many areas of Zimbabwe,” comments Dr. Cairns, Senior Maize Physiologist at CIMMYT.

Thanks to climate projections and modelling carried out five years ago by the CGIAR Research Program on Climate Change, Agriculture and Food Security (CCAFS), CIMMYT knew that heat stress was going to be a major problem in the future, so established 15 hectares of heat screening across several countries, including Zimbabwe. Using conventional breeding techniques, CIMMYT is now the only research organization in Eastern and Southern Africa to have developed a range of hybrid seeds that yield twice as much as the current, most popular hybrid under test conditions.

“Due to the high temperatures we had last year, both farmers and seed companies are demanding varieties which include heat tolerance,” Dr. Cairns adds. “If we had only begun breeding for heat stress this year, the first heat tolerant varieties would be only be ready by around 2021. This underscores the need for breeding programs to keep pace with the latest climate projections.”

Farmers who have tested the new varieties, like what they saw.

“There is real hunger here,” Apollonia Marutsvaka, a farmer from Zaka told us. “I am lucky that I planted the demo seed (from CIMMYT) after the first crop failed. Compared to other conventional seed, the demo seed survived in the hot and dry conditions we experienced. Despite the heat and dryness, I got something, and now I will only run out of food around February (2017).”

Although three major seed companies in Zimbabwe intend to release these improved hybrids, it will still take between one and two years for them to reach farmers, due to the time it takes to make large enough quantities to sell.

A recent report published in Nature Climate Change highlighted that current crop breeding programs are not keeping pace with climate change – and efforts must be directed at reducing the time it takes for a new seed to be developed and disseminated.

To speed up its work, CIMMYT is also using a range of new technologies at their Chiredzi research station. For example, drones are now being used to monitor crop health from the sky. A job that could take days when done manually is now completed in a matter of minutes by the drone.

For farmers in the Zaka region, there is now hope for the future. The recent climate talks in Marrakech highlighted the importance of adapting African agriculture to climate change, and the story of heat tolerant maize in Zimbabwe was shared as a shining example of how Africa agriculture can adapt to a changing climate.

“Investment in agricultural research to develop and disseminate new seed technologies is one of the best investments we can make for climate adaptation,” comments Dr Andy Jarvis, from the International Centre for Tropical Agriculture (CIAT).

“Climate funds could be used to help the world’s farmers stay several steps ahead of climate change, with major benefits for global food security.”