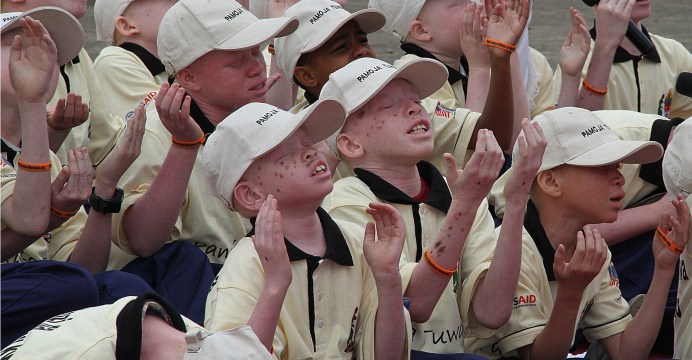 Ghana Association of Persons with Albinism (GAPA), have embarked on an awareness walk through the principal streets of sunyani in the Brong Ahafo Region with the aim of creating awareness about their existence.

As the association recognizes and celebrate the struggle of persons with albinism globally, they also commend United Nations (UN) for the creation of International Albinism awareness day.

Speaking to the The Herald, Mr. Newton Kwamla Katseku, the National Director of the Association, observed that the International Albinism awareness is celebrated annually by persons with albinism worldwide.

And the day had been proclaimed by the United Nations to spread the information about albinism and to avoid mobbing and discrimination of persons with albinism.

The International Association of Albinism day was initiated in 2014 but firstly realised in 2015 on the theme “Persons with Albinism Worthy of Respect and Dignity”.

He called for total recognition of differences, possibilities and assets instead of disabilities because each individual person with albinism is unique, with strengths that could make a positive effect on society.

He called for support to enhance persons with albinism to accept the responsibility to be actively involved in educational, economic, cultural, political, health and other societal problems aimed at improving and protecting their rights, as well as promoting inclusion of all persons with disability.

In fact, the survival of human community depends not on stigma or eliminating or those who are different in colour or having any other forms of disability, and seeking only those whom they think have no disability.

It seems that Africa where these things are happening, people still hold up to such useless, senseless and insensitivity traditions that have caused the doom of the continent, he stated.

The other dimension of the theme points towards human rights which are the basic rights and freedoms to which all humans are entitled, the right to life, liberty, freedom of thought and expression, and equal treatment before the law.

He stated that persons with albinism have strive to overcome numerous challenges and have managed to enjoy some of these rights. Mr. Katseku noted that Persons with albinism in all sectors and facets of life have made tremendous contributions to society.

He stressed that many albinos including the Tanzania’s first deputy minister of state, Abdullah Possi and Kenya’s member of Parliament with albinism, Isaac Mwaura have made tremendous efforts to the world.

In addition, he claimed that Super models with albinism are shattering stereotype. From the United State of America, Hong kong and South Africa, these models both humanized and the uniqueness of albinism showcase their beauty in the world that has ridiculed and misunderstood the condition for centuries.

Artistes in various walks of life including the notable Salif Keita of Mali, Yellow Man of Jamaica, the Winter Brothers of USA have all paved the way for new voices such as that of Moses Swaray in Liberia and Keisha of Tanzania.

In sports, persons with albinism compete with success such as gold medalist Skier, Kelly Gallaghar, and the world known wrestling champion Mwimba Texas from the Democratic Republic of Congo.

Moreover, he indicated that in Ghana a well known lawyer Moses Foh Amoaning who is also a person with albinism is worthy celebrated.
According to the address of the association, one can only enjoy the fullest life if he felt being included in everything.

In order to make a society more inclusive, let us ensure equitable distribution of the national cake, making our educational institution accessible, giving fair hearing to all, and realizing that persons with albinism are humans.

He urged the association to stand and voice out for change for our generation.There are also numerous persons with albinism leading diplomatic offices, and those at the helms of civil society, leading Non-Governmental Organizations, Academic Institutions and Religious Communities across the world.

In spite of these successes, it remains a serious matter of concern that, physical attacks against persons with albinism particularly women and children, continue and have now been reported in areas and countries where it was believed not to have been an issue.

He stated that attacks on people with albinism may stern from ignorance and criminal acts which demands justice. The group further called on the state institutions to take all possible measures to provide greater protection to persons with albinism and to strengthen their legal responses to crimes affecting them.

They also call on the government to as a matter of urgency develop and adopt comprehensive strategies to eradicate discriminatory practices against persons with albinism.

He therefore asked the leadership to ensure that albinos have adequate access to health care, social services, employment and education.

The association through Mr.Ketseku cried to traditional leaders to eliminate all barriers in and around their chieftancy institutions to enable persons with albinism access those places without fear.

As the United Nations continue to mobilize international action against this abhorrent discrimination countries are called to engage in this effort.

Adding that, those countries where discrimination is not a prevailing problem should support dedicated activists who stand for the rights of persons with albinism.

Recalling on resolutions, the United Nations human rights council in 2013, called on states to take all measures necessary to protect people with albinism and to ensure accountability through the conduct of impartial, speedy and effective investigations into crimes against them.

As deep efforts in human rights have been made, persons with albinism should be enjoying the fruits of these efforts and the road ahead towards achieving this goal is long yet possible.

The success of those with albinism who have overcome formidable challenges and the commendable efforts made by some states on the issue are both good beginning and a ray of hope.