Management of Komfo Anokye Teaching hospital (KATH) in Kumasi has denied any wrong doing in failing to released the body of a 22year old Richmond Osei popularly known as Tawiah who died through police brutality as alleged by his family.

According to Public relations officer of the second premier hospital Kwame Friempong, the family of the deceased failed to submit the needed three death certificates to the hospital as required by law.

The final funeral rites for the 22-year-old Richmond Osei was scheduled to come off today Thursday June 9 in Krofrom.

However, the funeral rites have stalled because management of the Komfo Anokye Teaching Hospital say they will only release the remains of Tawiah after they receive an official clearance from the Police Service.

The hospital has also denied asking the family of the deceased to render unqualified apology for denigrating Komfo Ankye Teaching Hospitals image and its members and raining curses on them in the aftermath of Tawiah’s death.

Background Tawiah who was mistaken for a criminal by a Police patrol team was brutally assaulted with batons and dragged on the streets by the Police officers till he became unconscious. He was later bundled into a Police van and sent to the Komfo Anokye Teaching Hospital for treatment but was pronounced dead upon arrival at the hospital. His death angered the youth of Krofom who blocked roads and burnt tires in protest of the youngman’s death. The three Police officers were subsequently arrested by the Ashanti regional Police command. An autopsy report conducted by the Hospital revealed that Tawiah did not die from Police brutality but from a congestive heart failure. The family have vehemently rejected the report and have rained curses on the Police officers. The Police officers were subsequently released from custody. 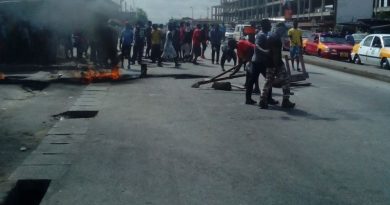