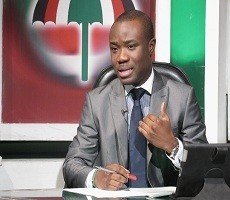 Government has hit back at the New Patriotic Party Presidential candidate Nana Addo Dankwa Akufo-Addo over claims that President Mahama and his administration are confused. Nana Addo told a group of Ghanaians in Italy that the NDC government is confused over reports of the imposition of pension tax. Finance Minister Seth Terkper reportedly hinted of the introduction of such a tax, but President Mahama later refuted such reports. However, Nana Addo in a speech in Italy said for the president to wade in to clarify matters after Mr. Terkper had spoken about the intended tax, smacks of incompetence and confusion at the apex of government. “Mismanagement, corruption and incompetence have brought us to where we are today. When the word ‘incompetent’ is used to describe his government, the President gets very upset. But this week we have seen another example. “The Finance Minister, Seth Terkper, told us that he is preparing to tax pensions and allowances. And his President, two days later, stated that they were not going to do anything like that. If this is not confusion in his government, then I don’t know what it is; and if this is not a sign of incompetence, then you would have to tell me what incompetence means.” But Deputy Communications Minister Felix Kwakye Ofosu in an interview with Starr News said the claims of the NPP flagbearer are not accurate. According to him, Nana Addo must crosscheck reports before he makes inaccurate claims. “It appears that the confusion exists only in the mind of Nana Akufo-Addo. We have long known that he has poor leadership skills and the state of his party bears ample testimony to this. “Increasingly, he has shown that he has no regard at all for the truth, facts, accuracy and research and so when he hears any media report without bothering to crosscheck the facts, he simply jumps onto the rooftop and makes claims that are completely false.”