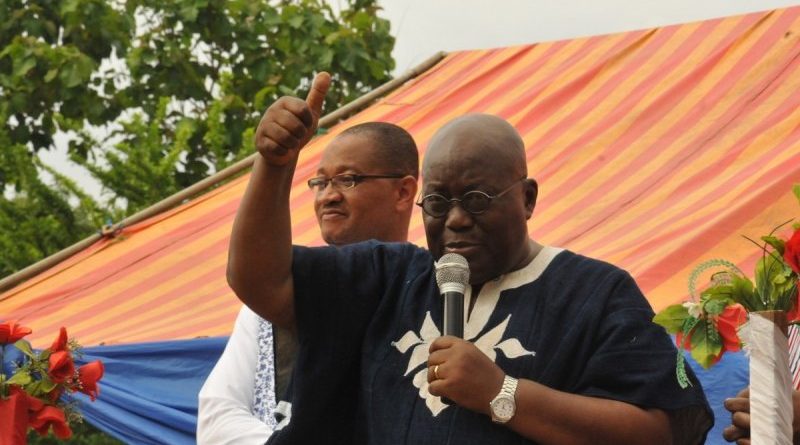 The 2016 presidential aspirant of the opposition New Patriotic Party (NPP), Nana Addo Dankwa Akufo-Addo, has charged Ghanaians to vote for President John Dramani Mahama if they are satisfied with the “current hardships” in the country but vote for him (Nana) for a positive change to alleviate their plight. Nana Addo, who is making a third bid to become president, made the call Friday, May 13, 2016, during a campaign in the Ablekuma Central constituency, as part of a four-day tour of the Greater Accra Region. Nana Akufo-Addo made surprise visits to Gaskia Zongo and Abossey Okai, where he interacted with residents and business owners at the two stops.

Whilst interacting with the Sarkin Zongo, Chief Issah Wanzam, and residents of Gaskia Zongo, the NPP flagbearer reaffirmed his commitment to establishing a Zongo Development Fund aimed at solving the basic infrastructure problems existing in Zongo communities across the country. He noted, however, that if residents were satisfied with their current conditions of living, they should have no problem voting for President Mahama in this year’s elections. “But if you take a look around you, and you are unhappy with your circumstances and you want change, you should vote for Nana Addo Dankwa Akufo-Addo. What is needed in Ghana now is a president who will work to bring jobs to the teeming masses of unemployed youth, some of whom are resident here. This is what Nana Akufo-Addo is going to do when you elect him as president,” he said. The NPP flagbearer added that, “I am not seeking the high office of this land because I want to steal your money and line my pockets with the nation’s resources. I am not coming into office for the well-being of my wife and my family. No! I am coming to do a job for Ghana and for Ghanaians. Have confidence in me, and vote for me this year, because I will not disappoint you.” On the criticisms making rounds in Zongo communities that an Akufo-Addo-led NPP government will re-introduce the Aliens’ Compliance Order of 1969, he stated, unequivocally, that “It is a complete, vicious fabrication.” According to him, when President Kufuor was in office from 2001 to 2009, he served as Attorney General and Minister for Justice for two years, and could say with confidence that such a policy was never initiated within the eight-year period. “What they (NDC) are saying is just to put fear in you so you do not vote for the NPP. I was the lawyer who handled the land case for Lawan Bako and other leaders of Sabon Zongo. I won the case for them in court and got them their land. How then can I be the one to come and sack you and others who are living in Sabon Zongo?” he asked. At Abossey Okai, also in the Ablekuma Central constituency, Nana Akufo-Addo assured spare parts dealers as well as Ghanaian entrepreneurs and small business owners, that his government would provide a conducive and enabling environment needed for their businesses to flourish. With the major concerns of business owners at Abossey Okai being the unstable nature of Ghana’s currency, high interest rate charges from banks, as well as high import duties at the ports, they told the NPP flagbearer that these issues posed serious challenges to the survival of their businesses. “Because of high import duties, we are forced to transfer this cost onto our customers. Things are very difficult in Ghana at the moment, and as such people do not even patronise our wares anymore. Abossey Okai of all places, which used to be a bustling business hub, is not the same anymore. How can we survive?” a spare parts dealer lamented. Addressing separate gatherings at the well-known spare parts neighbourhood, the NPP flagbearer assured that, “We in the NPP are coming to change Ghana and ensure that our monetary system is solid, so that we can have a stable currency. When this happens, you, as business people, and your businesses will grow.” However, to ensure that this happens, Nana Akufo-Addo appealed to the thousands of businessmen and women at Abossey Okai to support his bid for election in this year’s polls, stating that: “I need your support. Have confidence in me, and I assure you that I will never disappoint you.” The flagbearer was accompanied by the party’s parliamentary aspirant for the constituency, Ebenezer Nartey; Policy Advisor Boakye Agyarko; Laud Commey of the Office of the Flagbearer; Alfred Boye, acting NPP Greater Accra Regional chairman; Adjei Sowah, NPP Greater Accra Regional Secretary; Campaign Aides, Musah Iddrisu Superior and Fatimatu Abubakar, amongst others.