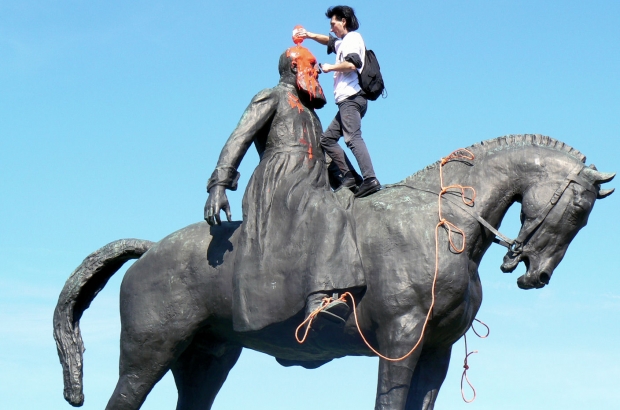 The City of Brussels has cancelled plans to hold an homage to King Leopold II on Thursday evening in front of the statue of the former Belgian king. Protest against the event was at the heart of the decision to cancel, due to the dubious role the king played in the colonial history of the Democratic Republic of Congo (DRC).

According to Brussels alderman Geoffroy Coomans de Brachène, the event was considered a “bad idea” by a number of organisations, even though the purpose of the meeting was to highlight the “important urban accomplishments” of Leopold II in Brussels, writes brusselnieuws.be.

The city has since cancelled the homage that was to be held tomorrow in front of the equestrian statue at Place du Trône. The accompanying conference at City Hall, however, will go ahead as planned, to commemorate 150 years since Belgium’s second king took the throne.

The homage has drawn a lot of criticism from the public, human rights organisations and politicians. Brussels MP Bruno De Lille called the event “morally reprehensible”, and likened it to “laughing at the suffering of the genocide victims and their families.”

While King Leopold II may well have left a significant mark on the urban landscape in Brussels, including the Justice Palace and Park Cinquantenaire, he is better known as the man responsible for the brutal regime of the Congo Free State at the end of the 19th century, one of the most exploitative colonial regimes in modern history, which cost as many as 10 million lives.

Letter from one of the most evil King Leopold II of Belgium to Colonial Missionaries, 1883:

The task that is given to fulfill is very delicate and requires much tact. You will go certainly to evangelize, but your evangelization must inspire above all Belgium interests. Your principal objective in our mission in the Congo is never to teach the niggers to know God, this they know already. They speak and submit to a Mungu, one Nzambi, one Nzakomba, and what else I don’t know. They know that to kill, to sleep with someone else’s wife, to lie and to insult is bad. Have courage to admit it; you are not going to teach them what they know already. Your essential role is to facilitate the task of administrators and industrials, which means you will go to interpret the gospel in the way it will be the best to protect your interests in that part of the world. For these things, you have to keep watch on disinteresting our savages from the richness that is plenty [in their underground. To avoid that, they get interested in it, and make you murderous] competition and dream one day to overthrow you.

Your knowledge of the gospel will allow you to find texts ordering, and encouraging your followers to love poverty, like “Happier are the poor because they will inherit the heaven” and, “It’s very difficult for the rich to enter the kingdom of God.” You have to detach from them and make them disrespect everything which gives courage to affront us. I make reference to their Mystic System and their war fetish – warfare protection – which they pretend not to want to abandon, and you must do everything in your power to make it disappear.

Your action will be directed essentially to the younger ones, for they won’t revolt when the recommendation of the priest is contradictory to their parent’s teachings. The children have to learn to obey what the missionary recommends, who is the father of their soul. You must singularly insist on their total submission and obedience, avoid developing the spirit in the schools, teach students to read and not to reason. There, dear patriots, are some of the principles that you must apply. You will find many other books, which will be given to you at the end of this conference. Evangelize the niggers so that they stay forever in submission to the white colonialists, so they never revolt against the restraints they are undergoing.

Recite every day – “Happy are those who are weeping because

the kingdom of God is for them.”

Letter from King Leopold II of Belgium to Colonial Missionaries, 1883 (2)

Convert always the blacks by using the whip. Keep their women in nine months of submission to work freely for us. Force them to pay you in sign of recognition-goats, chicken or eggs-every time you visit their villages. And make sure that niggers never become rich. Sing everyday that it’s impossible for the rich to enter heaven. Make them pay tax each week at Sunday mass.

Use the money supposed for the poor, to build flourishing business centres. Institute a confessional system, which allows you to be good detectives denouncing any black that has a different consciousness contrary to that of the decision-maker. Teach the niggers to forget their heroes and to adore only ours. Never present a chair to a black that comes to visit you. Don’t give him more than one cigarette. Never invite him for dinner even if he gives you a chicken every time you arrive at his house.

Africa was exposed to the world by Mr. Moukouani Muikwani Bukoko, born in the Congo in 1915,

and who in 1935 while working in the Congo, bought a second hand Bible from a Belgian priest

who forgot the speech in the Bible” – Dr. Chiedozie Okoro 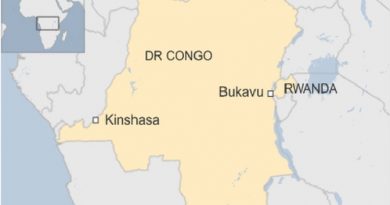