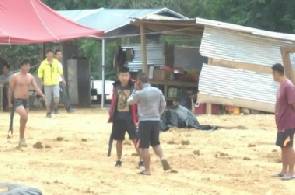 A Chinese National  identified only as Lee Fou alias ‘Soldier’ is suspected to have shot his Ghanaian in-law Kwaku Marfo, at Koko-Tabuom in the Atwima Kwanwoma district in the Ashanti region of Ghana. Reports say Marfo has lost his toes in the incident.

Fou, who is engaged in some sort of mining in the area reportedly also shot one Daniel, who works with him at the mining site. Daniel is currently on admission at the Komfo Anokye Teaching Hospital (KATH) in Kumasi. Reports say it started when both men complained of a delay in the payment of their salary arrears.

Marfo who is also an employee to the Fou alleged that he mutilates their bodies for rituals.

“The Chinese and his accomplices mutilate us and later sack us from the company. They do this for human sacrifices,” he alleged.

According to him, when he requested for his salary arrears after resuming work, Fou flared up and started firing the gun indiscriminately hitting his toe in the process.

‘After resuming work from the hospital, he sacked me, telling me that he doesn’t need my services anymore,’ he told our reporter.

He said though he was prevented by his family from reporting the case to the police, he has currently lodged a complaint at the Atwima police station.