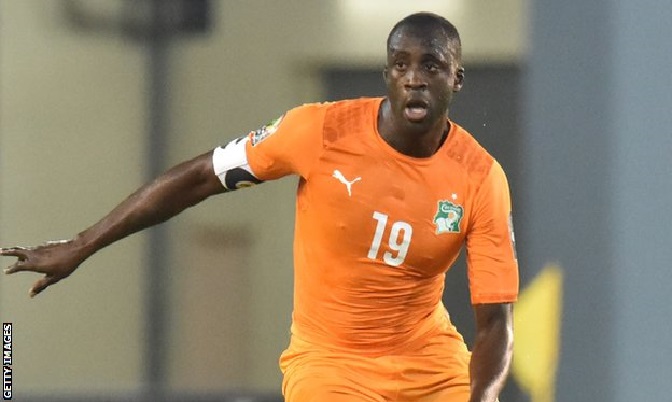 Manchester City’s Yaya Toure has asked not to be included in Ivory Coast’s squad for their Africa Cup of Nations qualifier against Sierra Leone.

Coach Michel Dussuyer has also left out Newcastle’s Cheick Tiote, plus Siaka Tiene and Lacina Traore for the match on 6 September.

Dussuyer says Toure is still thinking about his international future.

“At the moment he’s in a period of reflection about his international future,” Dussuyer said.

“I met him in London and told him I was counting on him.

“He’s a big player and the captain of the team. I hope he’ll continue his adventure with us.”

Toure said in March that he was considering whether to continue playing for the 2015 Nations Cup winners.

Dussuyer also explained the absence of several other experienced players.

“As for Cheick Tiote we tried to get in contact with him through various means but there was no sign of life.

“I just wish he had made his position clear. Siaka Tiene still doesn’t have a club,
“As for Lacina Traore and Tallo Gadji, I have to make a choice but it doesn’t mean that I won’t call on them in the future.

“They will just have to play well for their clubs.”

The match will be played in the Nigerian city of Lagos as Sierra Leone are banned from hosting matches at home due to the Ebola crisis.

The group also includes 2017 Nations Cup hosts Gabon but their matches will not count towards qualification. Only the group winners advance to the finals.