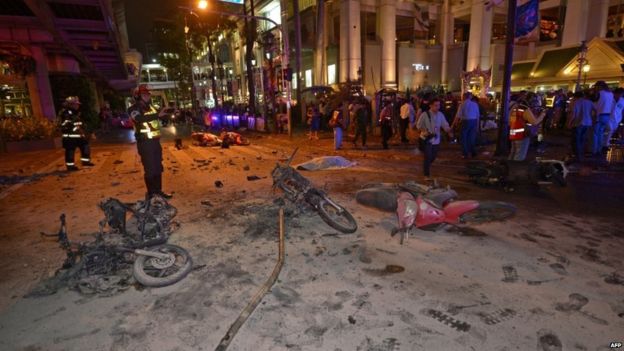 A bomb has exploded close to a shrine in the centre of Thailand’s capital, Bangkok, killing at least 16 people and injuring more than 80.

The Erawan Shrine, which was crowded at the time, is a major tourist attraction and foreigners, including Chinese, are among the casualties.

Defence Minister Prawit Wongsuwon said the bombers had “targeted foreigners… to damage tourism and the economy”.

“We will hunt them down,” he said.

Bangkok blast: The events of the day

The Nation TV channel quoted Prime Minister Prayuth Chan-ocha as saying the government would set up a “war room” to co-ordinate its response.

National police chief Somyot Poompummuang said that 10 Thais had been confirmed dead, along with one Chinese and one Filipino.

He said: “Whoever planted this bomb is cruel and aimed to kill. Planting a bomb there means they want to see a lot of people dead.”

The government in Hong Kong said three of its residents had been injured.

The Bangkok Post quoted police as saying that 3kg of TNT had been stuffed in a pipe inside the shrine and that an electronic circuit suspected to have been used in the attack was found 30 metres from the scene.

Police checked the area for other devices but no further bombs have been found, the paper said.

The BBC’s Jonathan Head, who was one of the first journalists at the scene, said there was a huge amount of chaos, with body parts scattered everywhere.

He says this is a very well-known shrine, next to a five-star hotel, and that people around it were hit by the full force of the blast.

There is no previous history of attacks in the Thai capital on this scale or with such murderous intent. One possibility is that they might be the work of Malay-Muslim insurgents in the south who have been fighting Thai rule for more than a decade. However, they have never targeted Bangkok before and casualties from their attacks have been falling.

National political turmoil has prompted some low-level bomb attacks by rival factions in the past – but again, nothing on this scale. There also seem to be few, if any, links between Thai militants and groups like the so-called Islamic State.

The shrine is popular with Chinese tourists and this raises at least the possibility of a connection to the Uighurs – a Turkic-speaking Muslim minority in the far west of China. They complain of cultural and religious persecution at the hands of the Beijing authorities.

Last month more than 100 Uighurs were deported from Thailand to China – a move that prompted widespread condemnation. But while there are violent elements in the Uighur movement, an attack on this scale outside China would be unusual to say the least.

One bystander, Alessandro Ursic, told the BBC: “When I arrived they had already cleared the bodies from the ground outside the Erawan shrine but there were and there are still pieces of human flesh strewn around the intersection; it’s really graphic.”

The BBC’s James Sales said: “I went into where the shrine is, where there were lots of bodies. I saw at least nine people unfortunately who looked like they had died and lots of Chinese tourists as well.

“I tried to administer CPR to one particular guy who was in his 40s… and he didn’t make it.”

The shrine is dedicated to the Hindu god Brahma, but is also visited by thousands of Buddhists each day. There are also three major shopping centres nearby.

The explosion was on the Ratchaprasong intersection, which has been the centre of political demonstrations in recent years.

There has been a Muslim insurgency, but this has been largely confined to the south of the country and attacks rarely take place elsewhere.

But Bangkok has seen a decade of sometimes violent rivalry between political factions.

The military took over ruling the country in May last year, removing an elected government following months of unrest.

The capital has been relatively calm since then. 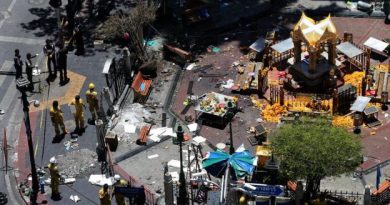 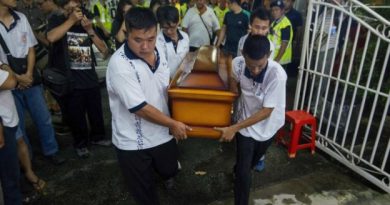