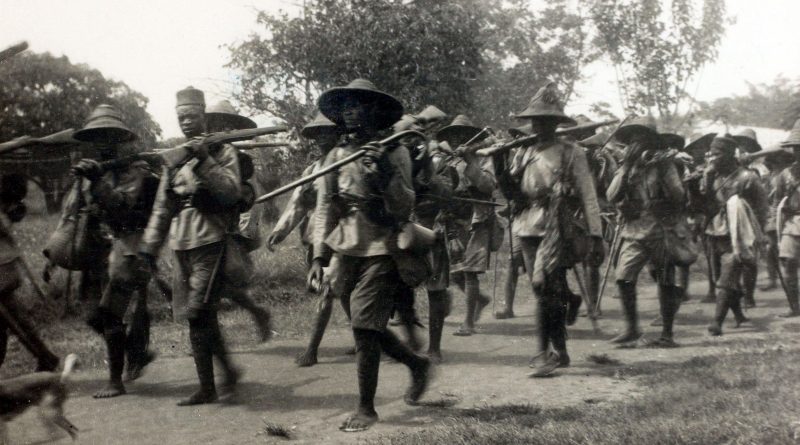 It can be difficult to comprehend how easily Africa has been erased from world history. One powerful example is its involvement in World War I, which has been virtually forgotten, despite the fact that an estimated 2 million Africans were pulled into the conflict as soldiers, workers, and personnel both in Europe and in Africa, according to historians.

The “Great War” was prompted by the assassination of Archduke Franz Ferdinand, 104 years ago today (June 28) and ended 100 years ago this November. Most people know the basics: that the war lasted four years, was largely fought between European powers, saw the death of over 16 million people, and ultimately lead to the rise of Adolf Hitler and eventually, World War II.

But what is rarely ever discussed is the deployment of hundreds and thousands of Africans not only on European battlefields, but at home, in a battle for power over the African colonies.

“All colonial powers promoted the idea of a ‘European civilizing mission’—that is, bringing the rule of law, order, stability, and peace to Africa,” writes Daniel Steinbach for the British Council. “Yet, in August 1914, they showed little hesitation before turning … Africa into a theatre of war.”

This hidden part of history is the subject of a new, epic show by South African artist William Kentridge titled “The Head and the Load.” Featuring an international cast, the show will premiere at London’s Tate Modern next month and at the New York Park Avenue Armory in December. The play’s title is a twist on a Ghanaian proverb, “the head and the load are the troubles of the neck,” and refers to the load borne by porters in the war effort as they marched away from their homes for forces that sought to control them.

Unlike the fighting in Europe, which mainly took place in trenches, the war in Africa took place over long stretches of land. The lack of roads and railroads, combined with the fact that most horses fell victim to the Tsetse fly, prompted German, French, and British forces to use African porters—four to every soldier—to carry supplies and machinery parts. An estimated 300,000 porters died along the way, according to historian Kathleen Bomani.

“The Head and the Load” places an international ensemble of actors, singers, musicians, and performance artists on a massive, elongated stage, moving them in a procession between an almost surreal set design of ladders and rotating platforms, and against a backdrop of film projections and Kentridge’s signature stop-motion animations. The play also addresses Africa’s sometimes willing involvement in the war as a way to prove itself. “For me, the First World War encapsulates, compresses, and heats to a certain temperature all the paradoxes and contradictions of colonialism,” Kentridge says.

This may have been a forgotten moment in history, but the sudden and violent interaction between Europeans and Africans was also to have a profound impact on Africa’s future. While some Africans fought willingly, many others resisted their deployment, and the brutal way they were treated. Colonial powers took note.

After the war, despite their efforts, Africans were denied their request for representation at the Treaty of Versailles. Germany’s African colonies were divided up between European powers, making Britain and France dominating forces on the continent. The division impacted millions of people, in countries including Rwanda, Togo, Cameroon, Namibia, and South Africa, and would have ripple effects for decades to come.

“Fundamentally World War I accelerated the process of political and economic change in colonial Africa,” writes Richard Rathbone in the Journal of African History (pdf). “It was a period in which a largely haphazard colonial world became an increasingly centralized affair. In many ways the War marked the period in which ‘pacification’ of both African and metropolitan critics of colonialism ends and colonial rule proper begins.”

More than a million African soldiers—the “forgotten veterans“—would go on to fight for colonial powers in World War II.