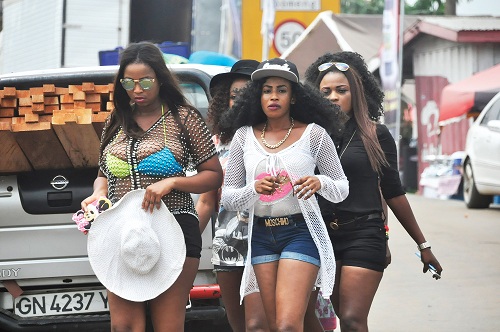 The Eastern regional Minister Eric Kwakye Darfuor has appealed to the Kwahu traditional authority to tone down on their call for decent dressing as revellers head for the mountains to celebrate Easter.

According to the Minister, the situation where chiefs in the area attempt to restrict merry makers on dress codes does not augur well for the celebration .

He said revellers should not be coerced and restricted in their outfit.

“I stand for correction, but to want to put restrictions to the way people will dress, people will behave in a period of ecstasy ,period of enjoyment, I don’t know how they can stop that, have you been to the Caribbeans; where they have road carnivals, people are almost like naked and they go, have you ever been at the beach, you know what happens at the beach, people go in their bikinis or their small panties and they lie there to tan themselves, and enjoy themselves.

“Even though it is foreign to us, I want our chiefs and elders to tone down, some have even proposed that they will be holding canes to cane people ,I don’t agree. May be Public education will do ,It is a free world ,a free country ,and the festivities are time for  people to enjoy themselves to let loose a bit ”

“We are beefing the already existing security operatives on the mountain with an estimated additional 400security officers to help maintain law and order during celebration” he said.

“We are expecting several people from different places including the president, the vice president and their spouses and it is important that we provide absolute security for the lives and properties of these people,” he added.

Speaking on the paragliding exercise, the minister pleaded with the Ghana Tourist Board and the ministry of tourism to create another landing site at the other end of the mountain for holiday makers to be able to enjoy the full Kwahu ridge.

“As we speak, the paragliding lands at the Nkawkaw sports stadium but if there could be another landing site at the other side of the ridge, like Adawso or Ekye Amanfrom, people could land there, make some merry and river tour on the Afram river before coming back to the mountains,” he added.

The President, Nana Akufo-Addo, the Vice President Dr. Alhaji Bawumia and their spouses are expected to be at Kwahu on Easter Saturday.