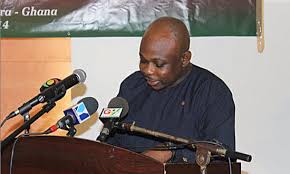 After confirming on the Morning Starr Thursday that the day was a holiday, Mr. Agalga called back and told host Nii Arday Clegg that he made a mistake and needed to correct it after speaking to his boss Prosper Bani. This year marks the 32nd farmer’s day celebration which will be observed in the Brong Ahafo region under the theme ‘Agriculture: A Business Response to Economic Growth’. Speaking at the Launch in Accra last week the Deputy Chief of Staff at the Flagstaff House, Mr Johnny Osei-Kofi, disclosed that government was providing a framework and institutional basis for a long-term engagement and supplementary financing for scaling up investment in a private sector-led pro-poor agricultural value chain development. Mr Osei-Kofi underscored the importance of Agriculture to the economic development of the country, with the Agricultural sector currently employing about 44.7 per cent of the total workforce in both the formal and informal sectors of the economy— according to the Ghana Living Standards Survey six, 2014, In his remarks, the Minister for Food and Agriculture, Mr Alhaji Mohammed-Muniru Limuna, noted that agricultural investment was one of the most important and effective strategies for economic growth and poverty reduction in the rural areas where the majority of the world’s poor lived. Mr Limuna said economic transformation through increased agricultural production required a sustainable increase in the level of investment in Agriculture. The Minister said Ghana had a lot of fertile suitable soil for the transformation of the agricultural sector, adding that out of the total cultivatable land area of about 14 million hectares, 7.8 million had been cultivated and that the remaining cultivatable land area could be cultivated to increase the country’s Gross Domestic Growth.