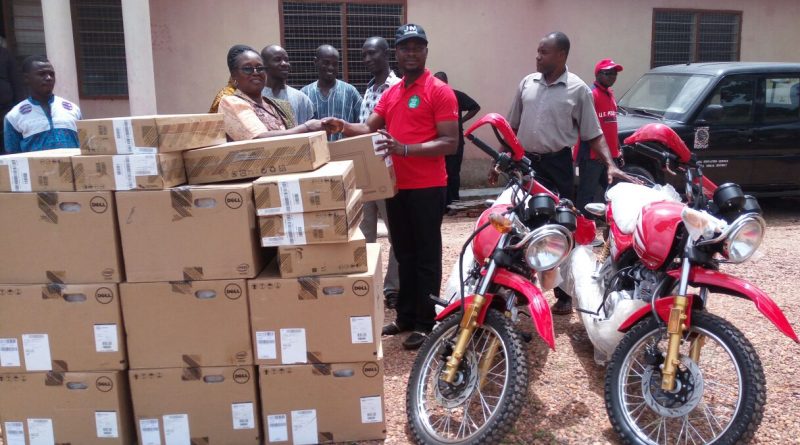 The National Democratic Congress’ Parliamentary Candidate for the Yapei-Kusawgu, John Abdulai Jinapor has donated fifteen computers and two motor bikes to the Buipe vocational Technical and the Buipe senior High School in the Central Gonja District of the northern region.
Presenting the items on behalf of the candidate, the District Chief Executive, Mumuni Shiraz Ibn Yacin said the donation formed part of their efforts to delivering quality education to the pupils in the district.

According to him the district has been able to build ….of schools with teachers’ accommodation in the district in less than four years.
The items, worth over 20,000.00 Ghana cedis was is in fulfillment of his promise to the vocational school following an appeal by the headmaster of the Buipe vocational technical during a visit to the school last month.
Prior to this, the Parliamentary candidate, also Deputy minister in charge of power, had donated thousands of exercise books and other teaching and learning materials to the basic and junior high schools in the district.
According to DCE, the vocational school was receiving ten while five go to the Buipe Senior High School.
According to the DCE, the district assembly last month had presented two motorbikes to the district education directorate from its share of the common fund to help in the monitoring and supervision of schools.
The District education director Madam Alice Aniwe Nawuri like the proverbial Oliver Twist appealed for more support to help facilitate the work of her office. According to her the district office has only one pickup vehicle which makes monitoring and supervision difficult.
She pledged to ensure the prompt distribution of the computers to the two senior high schools to enhance the practical teaching of ICT which is the purpose for which the donation was made.