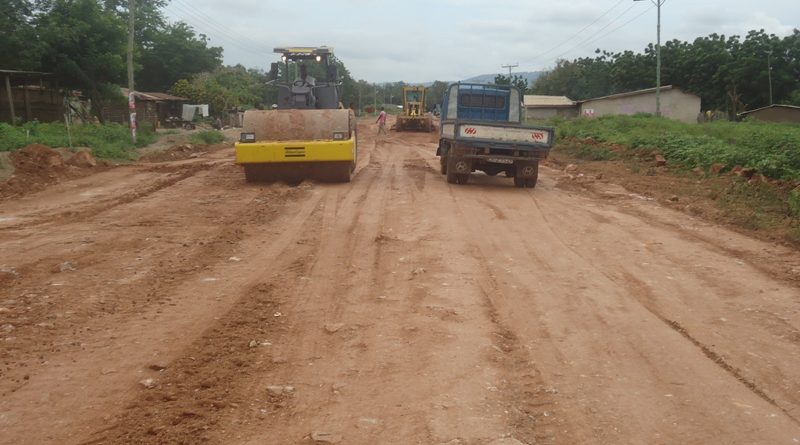 A fortnight after ghnewsnow’s publication on the horrible state of the Doryumu to Ayikuma road, ALTEP Construction has moved to site to begin work.

Visiting the stretch, ghnewsnow observed that there was some earth work going on between Ayikuma and Asebi, with heaps of gravels that had not been touched for many months all spread to provide some height to the road.

There were tipper trucks moving to and fro a gravel pit between Ayikuma and Larteh conveying gravels to the road construction site, speed of work residents and drivers who traversed the Ayikuma-Doryumu road said would yield them better results should that enthusiasm continue.

Daniel Amponsah and Adams Osei, both cabbies at the Ayikuma taxi station, told ghnewsnow that a local radio station in the Shai-Osudoku District, Somanya, Kpong and Tema extensively reviewed the paper’s maiden publication and after several phone in calls by commuters to lash the assembly and government for neglecting them, the contractor quickly mobilized to site.

ALTEP Construction, ghnewsnow gathered from its first publication, that it abandoned site for non-payment, and seeing it on site, the taxi drivers believed that the government might have been paid some money to the contractor to get it back to work.

However, the drivers complained of the careless movement of the heavy road equipment of ALTEP on the stretch.

“There are no road signs and warnings to drivers and so a driver is unable to observe the nature of the road at some points. Again, the workers often cross the road with their heavy equipment, therefore, keeping commuters in their vehicle for several minutes,” Francis Larweh and Gideon Kwao, both taxi drivers, narrated.

Some residents at Asebi expressed fear that their homes would flood because the road was either low or slopped without culverts on the edges.

Noah Kabutey said, “I enquired from the contractor why he did not construct a culvert to save our homes from flooding before filling the road, but he snubbed me and said I could not teach him his work.

“If the construction of the culverts will come after the road construction, then I wonder what kind of contractor the government has engaged.”

Traversing between Asebi to the Shai Hills junction, through Doryumu, ghnewsnow observed that some chippings had been tipped on the road, with some workers measuring the width and height of the rugged road.

The stretch between Asebi and Doryumu is so bad that commuters told ghnewsnow that they would rather the contractor, in the mean time, made it some even while it prepared to move its equipment to the site later.

Several vehicles break down on the torn road and Stephen Anokyi, a Tema-Koforidua driver who plies the stretch, said most drivers frequented Abosey Okai to buy some spare parts to replace broken ones due to the road.

There were deep ‘ponds’ on the road that appeared easily accessible and commuters said several vehicles broke down in the ponds as the height of the muddy water cloaked engines.

The site engineer for ALTEP Construction was not on site as at the time of the visit by this reporter.