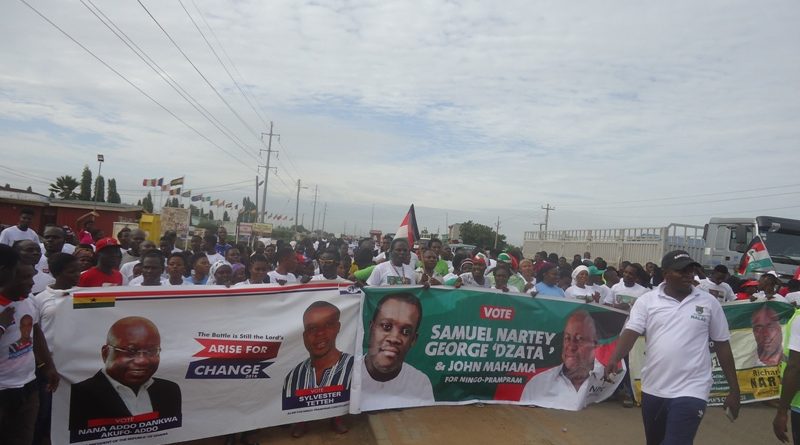 Four political parties in the Ningo-Prampram Constituency, on World Peace Day, shook the foundations of Afienya with a 5km-mammoth health walk.

Beginning the walk from the main entrance of the First Battalion of Infantry (1BN), Michel Camp, to Afienya, supporters of the National Democratic Congress (NDC), New Patriotic Party (NPP) and All People’s Party (APC) waved party flags to residents and travelers to drum home the need for a peaceful Ghana before, during and after this year’s general elections.

The walk was organised by the Afienya Keep Fit Club with support from Enoch Teye Mensah, outgoing Member of Parliament (MP) of the constituency, and numbering about one thousand, the marchers demonstrated their readiness to hold the peace of the constituency.

Taking turns to address the large gathering at Afienya where the exercise ended, Issah Vanguard, Al Latiff Amanor and Richard Nartey reminded them to ensure that the spirit of unity and solidarity they had demonstrated would not douse.

They held that the peace of Ghana to enable Ghanaians go about their duties should surpass any political party’s parochial interest in fomenting trouble before, during and after the 2016 elections.

“Let us not do anything ill that will retrogress our accelerated development. Elections are not wars,” Issah Vanguard, NDC, said.

Al Latiff Amanor, NPP, said there were family members who belonged to different political parties, therefore, the need for political tolerance in every home and workplace.

Richard Nartey, APC, said he was happy his party was not left out in the exercise “and this is a clear demonstration that our constituency and Ghana will continue to enjoy a stable country after the elections.”

Benedicta Dogbatse, addressing the gathering on behalf of Enoch Teye Mensah, said her boss was happy he could be supporting the exercise every September 21.

The day was Founder’s Day in Ghana, and Miss Benedicta said the youth should do well to honour their heroes and heroines and respect authority irrespective of the authority’s political affiliation or religious sect.

She entreated the youth to flee from engaging in any form of political violence “because violence does not pay.”