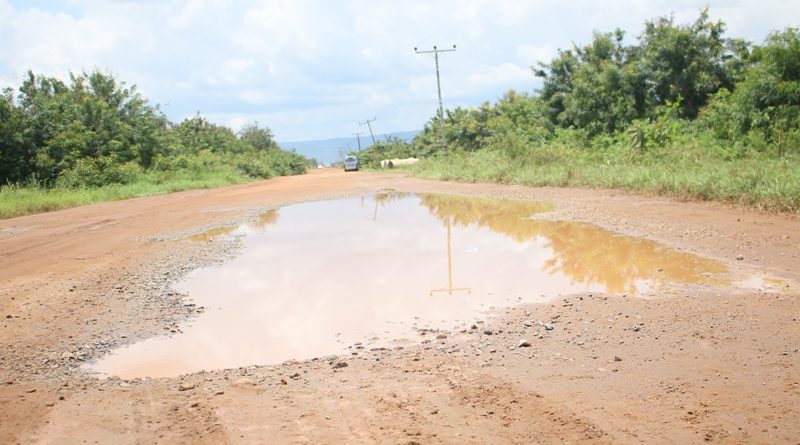 Residents of Doryumu in the Shai-Osudoku District have resolved to punish the National Democratic Congress (NDC) for leaving their roads to turn to pools.

The area, since 1992, has been a waterloo for the New Patriotic Party (NPP) because of the residents’ love for the NDC; however, they told ghnewsnow that they would vote for a change in the December 7 polls.

“Crush rocks for the construction of roads and the expansion works at the Tema Harbour are carried from our land yet the government and party we have so much loved has neglected our road,” Samuel Nubuor, a taxi driver at Doryumu said.

Adzido Emmanuel, chairman for Doryumu Taxi Drivers, told ghnewsnow that they would embark on a couple of demonstrations before the elections to remind the area’s electorates of the need to stab the government in the back for neglecting them.

He said, “The President says he is fixing roads in the Greater Accra Region, which is true, but has he ever mentioned ours in any of his public deliveries? Our government has taken us for granted for far too long and the appropriate time to see it off is on December 7.”

The Doryumu waterlogged and immotorable road connects Kordiabe and Agormeda to Aseseso to Koforidua, and so drivers who ply between Ashaiman and Koforidua and Tema and Koforidua drive through the pools to and from their destinations.

Several vehicles break down on the stretch as many engines are submerged because of the depth of the pools, which from afar appeared easily accessible.

Abraham Teye Mensah, secretary to the Doryumu Traditional Authority, told Ghnewsnow that several petitions to the government and Ghana Highways Authority to fix their roads were yet to receive any tangible response.

There are about 20 quarry sites in the area and so he wondered why rocks for the construction of roads in parts of the country could not be used by the government to give their horrible road the needed shape.

“Our road also links to Ayikuma, Madina and Larteh, and so you see, this is a major link road but this government has taken us for granted. We can no more be lured,” Mr. Mensah explained.

He said the Traditional Authority had been holding the peace of the youth of the area from mounting road blocks “because that will create a lot of insecurity in the area.”

When contacted, assemblyman for the Abieter Electoral Area Jacob Buerter Emmanuel said the cost involved in rehabbing the road was beyond the coffers of the assembly.

Consequently, the Ghana Highways Authority, he explained, awarded the contract to a local contractor who had abandoned site for government’s indebtedness to him.

“At Ayikuma, you will see heaps of gravels tipped on the flanks of the deplorable road but the road has seen no show for years now,” Mr. Buerter told ghnewsnow.com

The contract was awarded to the contractor, whose name or firm he could not readily recollect, three years ago.

“When I raise the state of our immotorable road at our general assembly meetings, my DCE tells me the contractor is on site, as if it is the on site that is causing the delay,” Mr. Buerter indicated.

The assemblyman said he sometimes paid the youth of the area to fill some of the pools with pebbles and other hard materials to make them quite accessible for vehicles.

In the dry season, the road became bumpy and with deep potholes and could easily break shocks of vehicles, he described.

Concluding, Mr. Jacob Buerter said, “I can no more defend the government for its years of neglect of our road which is going to cause it a lot of votes in this year’s election.”