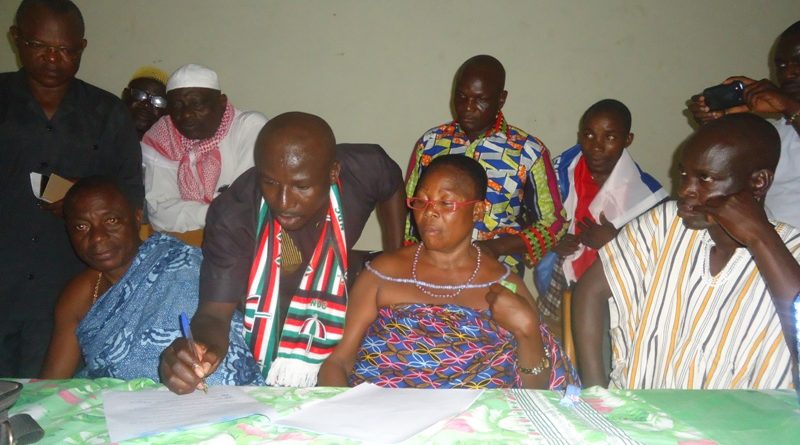 District Chief Executive (DCE) for Nkwanta South has advised the youth against fomenting violence before, during and after this year’s general elections for GH₵40 from any politician.

Alfred Kofi Wukanya told the youth that governance is about the continuation of a previous government’s development programmes and working hard to better the lives of the citizenry.

“And the beauty that democracy brings us is the healthy exchange of divergent views such that whoever is able to convince the electorates to buy into their ideas is voted for to lead the nation. Do not allow anybody to pay you GH₵40 to destroy or burn Ghana,” he advised.

Three districts in the Volta Region—Nkwanta South, Nkwanta North and Krachi- Nchumuru—under the auspices of Royals Health Organisation (ROHEO), with funding from Star Ghana and its partners—UKAID, DANIDA and European Union—were brought together to pledge their commitment to uphold peace before, during and after this year’s election.

Dubbed the ‘Nkwanta Declaration’, opinion leaders, political youth groups and representatives of the Electoral Commission (EC) pledged to hold the peace in the three districts after signing of the election 2016 Memorandum of Understanding (MoU) of peace and co-existence, and marching through some principal streets of Nkwanta.

Alfred Kofi Wukanya, who was the guest speaker at the ‘Nkwanta Declaration’, reminded the youth that the sales from their farm produce was more than the paltry GH₵40 any insensitive politician would pay them to burn Ghana for their political gain.

“Be wise and know that that politician who would buy your conscience would disown you should the law grab you for your violent act.”

He entreated the opinion leaders to continue engaging their youths in nation building. 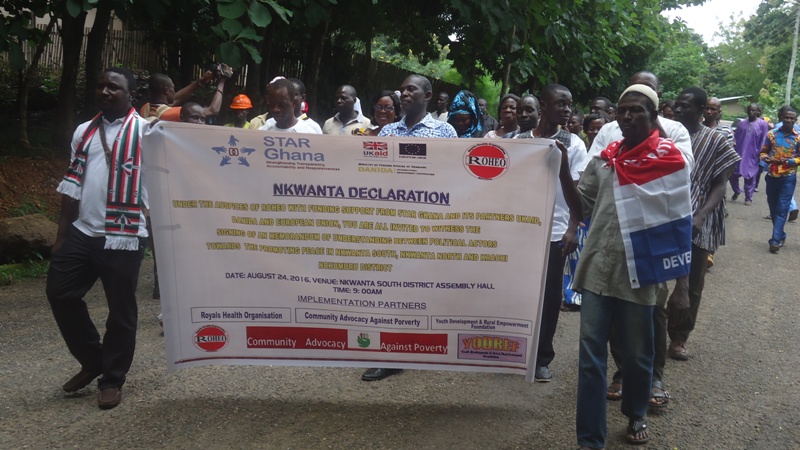 Joe Soglo, Chief Executive Officer (CEO) of ROHEO, for his part, explained that participation of all citizenry in electioneering activities was cardinal to development and peace, consequently, the need for everybody to work towards equal participation in the 2016 elections.

To this effect, he said there was the need to avoid marginalization and work towards promoting inclusiveness to uphold the existing peace in the country.

Mr. Soglo, therefore, called on politicians, who are the main actors in elections, to avoid coercing innocent citizens especially the youth, to cause mayhem to destabilize the peace of Ghana.

Furthermore, he urged the EC and its representatives to make all voting centers favourable and accessible to all the political parties, and remain an unbiased referee to promote the acceptance of the outcome of the elections.

To the media, he pleaded for decorous reportage and if possible, avoid publishing or airing provocative utterances of nation-wrecking politicians or political activists.

Finally, Joe Soglo advised the youth to reject any form of financial inducement that might trigger violence or have the tendency of disrupting the peace in their constituencies.

Victus Tetteh, Consultant for the project, was hopeful that the ‘Nkwanta Declaration’ would yield the needed results, explaining that ROHEO and its partners and sponsors would continue to remind all the participants of their words and the MoU.

The other partners of ROHEO were CAAP Ghana and YODREP.