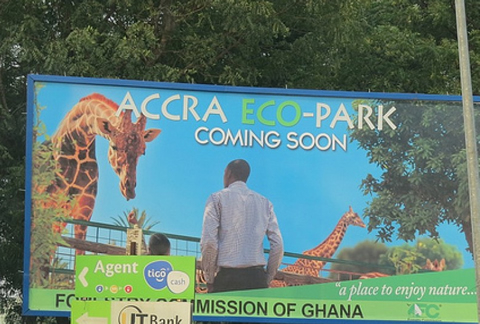 Latest News
August 22, 2016August 22, 2016 Isaac J Bediako 0 Comment Eco-tourism Park
Government has revealed that, the conversion of the Achimota Forest into an Eco-tourism Park will see to the creation of over ten thousand jobs for the increasing unemployed youth and further save the forest from further encroachment.
President John Dranmani Mahama, in statement read on his behalf by The Deputy Minister for Science, Environment And Innovations, Dr. Alfred Sugri Tia, said, the Forestry Commission and their Development Partner, Aikan Capital, will give the people of Accra a nature-based world class recreational facility that will make Accra a major ecotourism destination in The West African Sub-Region. He made this known at a sod-cutting ceremony in Accra, to start the conversion of the forest into an ecotourism park.
ghnewsnow.com Ibrahim Obeng-Mensah, report that, the conversion of the forest into an ecotourism park, was conceived by The Board Of The Forestry Commission in 2009, to diversify the benefits of the forest reserves into a more gainful venture, after Cabinet’s approval in September 2013.
Since the financial investment of the project was too huge, Cabinet recommended a Public Private Partnership, PPP, as an option, to develop the necessary infrastructure that, will see the Achimota forest, become a major ecotourism destination in West Africa.
The Member Of Parliament for Sanarigu and Deputy Minister For Environment Science Technology And Innovation, Dr. Alfred Subri Tia, speaking on behalf of The President, at the ground breaking ceremony, said, Government has placed a high premium on infrastructural developments.
He stressed that, Government envisages putting the country on a sound basis for socio-economic development, to suit the country’s middle income status. He said, Government under the watch of President Mahama, will support any PPP initiative to support government to develop the necessary infrastructure for ecotourism. He re-affirmed that, government has not sold the Achimota land to anyone.
However, The Chief Executive Officer of The Forestry Commission, Afari Dartey, believes that, the project will conserve the forestry from deforestation and in effect, enhance the contribution of three point five percent, of its generated revenue, to Ghana’ Gross Domestic Product. GDP.He stressed that, The Commission has decided to prioritize ecotourism development to safeguard the ecological integrity and wildlife reserve.
The Minister Of Lands And Natural Resources, Nii-Osa Mills, explained that, over the years, the forestry sector has depended heavily on timber revenues, to the disadvantage of the enormous potentials, in the wildlife and eco-tourism sub-sector, hence the need for sustainable and diversified income generating avenues. This he reckoned will help boost Ghana’s economy and enhance job creation for the teeming unemployed youth.
Story By : Ibrahim Obeng-Mensah.