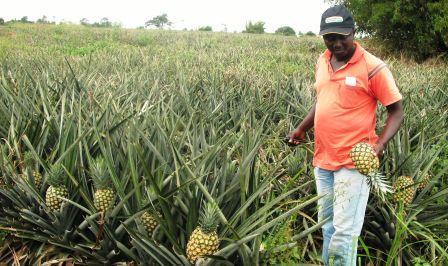 Pineapple farmers in the Brong Ahafo Region are frustrated at the unresolved challenges in the farming business which has seen production yields decline sharply, threatening new investments into the fragile business.

Non-availability of mechanised farming machinery such as tractors; difficulty in accessing subsidized fertilizers; lack of guaranteed market for the produce; lack of quality pineapple suckers; and weak extension services are some of the challenges the farmers say threaten to derail gains made in increasing the yields per acre of pineapple farms in the region.

A 36-year-old farmer, James Adu-Gyamfi, who owns a 230,000 unit pineapple-farm at Nsoatre in an interview with ghnewsnow.com gave an insight into the prevailing challenges crippling pineapple production.

“I’m currently at the crossroads; the crops are on the verge of fruiting and I need fertilizers to apply so that the fruits can mature properly. But accessing fertilizer still remains a dream. All the banks I approached for loan turned their back against me. Previously I was retailing plywood, and it was easier to access loan at the banks but since I diverted into agriculture all my bankers have deserted me,” he lamented.

The country accounted for about 10 percent of the international pineapple export in 2004, which has since shrank to three percent in 2014 with earnings also cut from US$24 million to US$19.2 million within the same period; a situation farmers argue is a consequence of the unattended challenges that have bedeviled the agric business for several decades.

For many farmers, the greatest challenge now facing the county’s pineapple sector is the inability of producers and exporters to increase production, mainly due to lack of financing for expansion as the production inputs and facilities require long-term and reasonably priced capital for investment by growers and exporters

Over the years, governments have responded to the challenges of the farmers by increasing subsidies to the agric sector including a free fertilizer and seedling programme, irrigation and mechanized system and other extension services to boost agricultural activities and yield, enticing more youth into farming.

However, administration and distribution network for the subsidy programmes have been hit and hit miss or largely misguided, discouraging many farmers from expanding their farms and scaring of many more others from going into agriculture.

Mr. Adu-Gyamfi who was adjudged the 2014 best oil palm farmer in the Sunyani Municipality has so far cultivated pineapple on a 15-acre land and wants to expand the farm but is visibly frustrated at the unavailability of a support system saying: “I have acquired addition 100-acre-land for expansion but to get a tractor for ploughing is the problem holding me back. I have personally visited the Ministry of Food and Agriculture (MoFA) office in the district on many occasions but I was told the district has no tractor.”

Mr. Adu-Gyamfi employs five permanent workers and 15 causal labourers. He indicated that everything with regard to pineapple cultivation in the Brong Ahafo Region is not working. “Even with the suckers, if you want large and quality quantity, you have to buy from Nsawam in the Eastern Region amidst huge transportation cost.”

“Some of us have shown our commitment to support the development of the agricultural sector; it is now incumbent on government to create the enabling environment for us to thrive. The current situation is frustrating and disheartening and therefore government must act immediately to protect sinking agricultural investments,” he added.

The agricultural sector, which employs a very large proportion of Ghanaians, has performed poorly in the last decade. Last year, the sector grew by 0.04 percent.

The number of people engaged in agriculture is even high in the Brong Ahafo region, which is one of the biggest food producing zones in the country. Crops like maize, cocoa, cashew, yam, plantain, and mango are largely produced in the region.

Government’s initiative to increase pineapple production attracted a lot of young people in the Brong Ahafo Region into the cultivation of the fruit.

Farmers in communities like Chiraa, Asuakwaa and Nsoatre all in the Sunyani West District are noted for championing the beleaguered agricultural paradigm shift in the region.