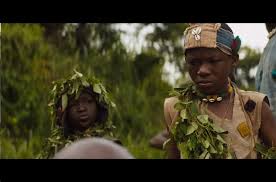 After Beasts of No Nation movie hit the cinemas, one child actor who has not gained international recognition, as Abraham Attah is Strika, a child soldier who never spoke in the movie.

The young boy who was picked from the streets of Sodom and Gomorrah, a suburb in Accra did not get the shine due him as compared to his colleague, Abraham Attah who has won many international awards. Many who have watched the movie, Beasts Of No Nation eulogized the young actor for his stupendous performance.

All hope is not lost for Strika known in real life as Emmanuel Nii Adom Quaye as producers of the Cary Fukunaga directed movie have enrolled him in school. This was revealed when Hitz FM presenter, MzGee interviewed actor Kobina Amissah-Sam who played the role of Agu’s father in the movie “Beasts Of No Nation”.

According to Amissah-Sam, producers of the movie are taking good care of Strika and other casts of the movie.“They have not been forgotten, they have really been taken care of. They are not lacking now as they used to so everything is cool for them now.

He has never been in school before but after the production, producers of the movie felt that they have to put him in school.

I don’t think that it is Netflix that is taking care of them, it is the producer who wants to help the kids. He is taking care of the three kids, Abraham, Striker and there is one other guy called Justice who stepped on Agu’s head when he was caught.” Kobina Amissah-Sam told Mzgee.

Kobina Amissah-Sam made it clear that owners of the production house, Red Crown Productions LLC who financed the movie are taking care of the young actors not the director of the movie, Cary Joji Fukunaga.

He added that “they felt that why should they leave them to go back to the streets when the movie is shinning somewhere. When people ask about your star Strika then they would have to find him on the street which will not speak well of them.”

He also disclosed that Strika is now signed on a casting agency, which is scouting roles for him. He continued that he has also been signed on the same casting agency with Ghanaian actors like Abraham Attah and Adjetey Annan aka Pusher.

Checks by Zionfelix.com have revealed that Red Crown Productions LLC was founded in 2010 by Daniel Crown and Daniela Taplin Lundberg.