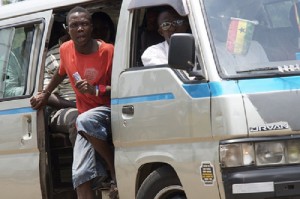 The vision of a 19-year old Isaac Anthony Aidoo to become a medical doctor hangs in the balance as the graduate from the Apam Senior High School (SHS) is constrained with finances to enter a tertiary institution in pursuit of his dream.

Isaac Aidoo graduated with credits in elective and core subjects which qualifies him to enter any of the country’s universities.

But due to lack resources to finance himself, Isaac Aidoo has been compelled by the circumstances to migrate from Dunkwa in the Central Region to work as a driver’s mate in Kumasi, Ashanti Region.

ghnewsnow.com kumasi editor  Isaac Bediako caught up with him revealed that Master Aidoo, survives on GH¢30.00 daily being proceeds from his work as a driver’s mate from which he also saves a little with the hope to make up for the amount to enable him fend for himself in school in the months ahead.

“My parents are poor farmers who are not able to fend for me and my other siblings. I therefore had to resort to this in order to further my education”, he revealed.

According to him, his first three weeks in Kumasi was a harrowing experience considering the difficulty he went through before even landing on the job as a driver’s mate.

He disclosed that he was particularly saddened on seeing his school mates at the Kwame Nkrumah University of Science and Technology (KNUST) pursuing tertiary education while he could only console himself with his present job.

“Sometimes when I see them, I become downhearted but I have hope that God will work out a miracle for me to get there someday”, he disclosed.