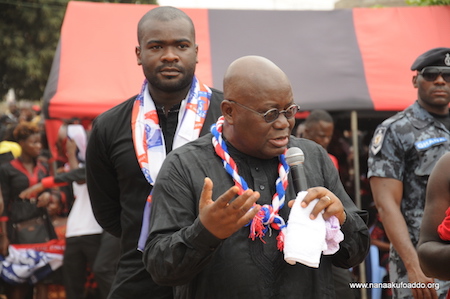 The 2016 presidential candidate of the New Patriotic Party, Nana Addo Dankwa Akufo-Addo, says Ghanaians have seen through the deliberate, false propaganda being employed by his political opponents, in their desperate bid to tag him as a violent person in the run-up to this year’s election.

Nana Akufo-Addo noted that because of the absence of a convincing electoral message and a solid record of performance, coupled with widespread corruption and unprecedented levels of economic difficulties and hardships, political opponents have resorted to the use of vitriolic attacks and lies against his person in their bid to score cheap political points, so as to win elections.

The NPP flagbearer’s comments come in the wake of deliberate ploys by functionaries and activists of the Mahama-led NDC government to denigrate the image of Nana Akufo-Addo, over the recent arrests of 3 South African security experts who were providing training for the security detail of the NPP presidential and vice presidential candidates.

“Everyone in Ghana will attest to the fact that I am a very patient man. Patience is one of my characteristics. I am not and have never been a violent person. Opponents, for their selfish political interests, spew out falsehoods all in their bid to smear my reputation. It has not worked and it will not work, because Ghanaians have seen through the lies,” he said.

Nana Akufo-Addo added further that “If I was truly a violent person, in 2012 I could perhaps have caused an inferno to engulf the nation in the aftermath of the disputed election results of 2012, and the close nature of the Supreme Court’s election petition verdict. I love Ghana more than myself, and that is why nothing of that sort happened.”

Regarding the call for a peaceful 2016 poll, the NPP flagbearer assured that if there are to be any disturbances in the country during and after the conduct of the general elections, it would not be initiated or instigated by the NPP.

“The NPP is a firm believer in democracy. The founding fathers of our political tradition, some of whom died bitterly and tragically in prison without trial in defense of their principles, fought for multi-party democracy. We, the adherents of this tradition, will not be the ones to undermine democracy. We will surely educate our supporters, but we will not allow anyone to cheat us. That will never happen,” he added.

Nana Akufo-Addo made this known when he paid a courtesy call on the newly installed Paramount Chief of the Kumawu Traditional Area, Barima Sarfo Tweneboa Kodua.

The NPP leader, who was in the company of national and regional party stalwarts, as well as some Members of Parliament, congratulated Barima Sarfo Tweneboa Kodua on his ascension to the stool of Kumawu, as well as Nana Serwaa Amponsah, Queenmother of Kumawu, for her role in selecting him and bringing the protracted chieftaincy dispute there to an end.

Touting the credentials of the new Chief, who worked as a medical doctor in Pramso, in the Bosumtwe district, Nana Akufo-Addo was confident that the reign of Barima Sarfo Tweneboa Kodua, who has taken the stool name of one of the great figures of Ashanti history and who excelled in the medical field, which included the setting up of an eye clinic, would see unprecedented levels of development in Kumawu.

“I am confident about the future of Kumawu, and I am certain that rapid progress will come to Kumawu under your leadership,” he added.

Nana Akufo-Addo, in concluding, requested that the Chiefs and people of Kumawu pray earnestly for Ghana, considering the current economic difficulties and hardships the country currently finds herself in, under the leadership of President John Mahama. He asked also asked for prayers for the peace, stability and unity of the nation in this crucial election year.

“When you pray, pray for your servant, Nana Addo Dankwa Akufo-Addo. Pray for strength, courage, wisdom and a good heart so I can be a good leader for the NPP, and for Ghana, if God so wills. Ghana deserves much better that what is currently on offer. Our fore fathers had a vision of what Ghana ought to be, and our current state is nowhere near what Ghana should be,” he added.

Barima Sarfo Tweneboa Kodua, in his brief remarks to the NPP flagbearer, thanked him for the courtesy of his visit to the palace and for his kind words. He encouraged Nana Akufo-Addo to remain patient and seek the face of God in his quest for the highest office of the land. 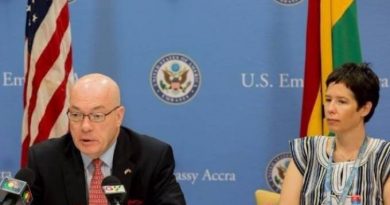