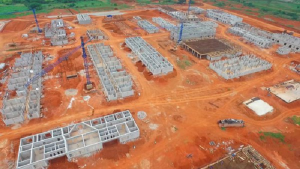 Contractors working on Ghana’s second Military Hospital at Afari in the Atwima Nwabiagya District of the Ashanti Region, sub-contracted to M. Barbisotti & Sons by Euroget De-Invest s.a have given firm assurances that the project will be completed by December this year as originally scheduled.

Even though work on the project is currently about 50% complete, the Atwima Nwabiagya District Chief Executive, Nana Asare Bediako expressed satisfaction about the progress and quality of the work done so far.

He expressed hope that the project will make the district better placed to attract economic investments. ‘To be frank with you, it has created lots of jobs for my people here in Atwima and its environs,’ he stated.