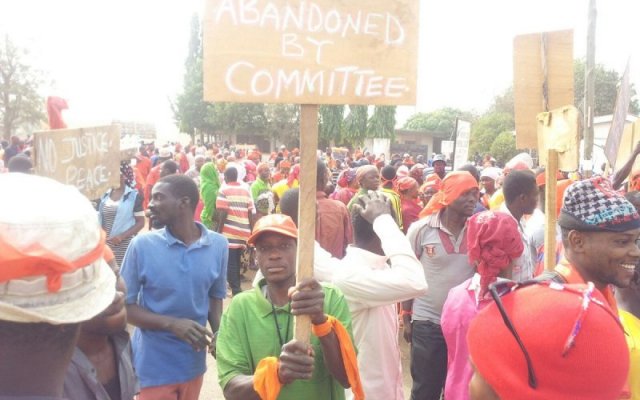 Hundreds of individuals from the Abudu Royal family in Dagbon demonstrated through the principal streets of Yendi in the Northern Region demanding access to the Gbewaa Palace to perform the funeral and burial rites of the late Ya-Na Mahamadu Abdulai IV. They are accusing the government and the Asantehene-led Committee of Eminent Persons of unfairness in the process of mediating the chieftaincy conflict between the Abudus and Andanis. Pressing home their demands to have their chief laid to rest, a petition addressed to President John Mahama was presented via the Yendi Municipal Chief Executive, Alhaji Issah Zakariah, with the title: ‘Renovation of the Old Gbewaa Palace’. According to the petition, the Abudus “wish to formally petition the high office of the President of the Republic of Ghana to, as a matter of urgency, order the renovation of the old Gbewaa Palace for the Abudu family to perform the funeral of the late Ya-Na Mahamadu Abdulai IV”. Abudu royals’ secretary Dokurugu Alhassan, who read the statement, also indicated that “alternatively, we appeal to the President to effect the immediate handing over of the dilapidated Gbewaa Palace to the Abudu royal family for same”. He said: “The Abudu family is willing and ready to renovate and occupy the old Gbewaa Palace for the sole purpose of performing the funeral of late Ya-Na Mahamadu Abdulai IV”. “We are convinced that our demands are within your powers to exercise under the constitution of the Republic of Ghana. We provide herewith both legal and customary reasons supporting our position that the funeral of late Ya-Na Mahamadu Abdulai IV must be performed in the old Gbewaa Palace unconditionally with the full complement of all the rights that are accorded a deceased Ya-Na,” he added.