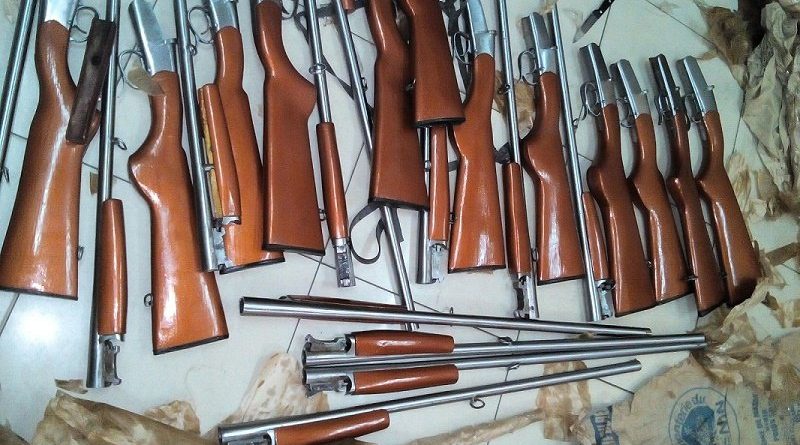 Immigration officials at the Aflao border in the Volta region have impounded a huge cache of guns and other ammunition.   the weapons were in transit to Ivory Coast through Ghana from Togo on a motorbike. The Immigration officer in charge of the Aflao section, Julius Gboglawo confirmed the news said, ” a 41-year-old man who was carrying the guns has been arrested and handed over to the Police for further investigations”. According to Mr. Gbogla, the immigration officers stationed at Aflao became curious after they noticed the suspicious behaviour of the man who was attempting to use an unapproved route to enter Ghana. He added that they stopped him and decided to conduct a thorough search leading to a discovery of 12 single barreled guns hidden in a sack. Mr. Gbogla added that the Beninois nationality, revealed that the guns were meant for some hunters in Ivory Coast. Further investigations are currently being conducted to arrest other accomplices who were working with him. This incident comes after Customs officials at the eastern border town of Aflao in the Volta region in December 2015 seized one million packs of short gun cartridges or bullets together with sealed packs of dry leaves suspected to be Indian Hemp (wee). According to officials at the Aflao border where the arrest was made, the same vehicle had made about six entries into Ghana per their records, and it is feared the same items might have been carted into the country from either Nigeria or Togo.