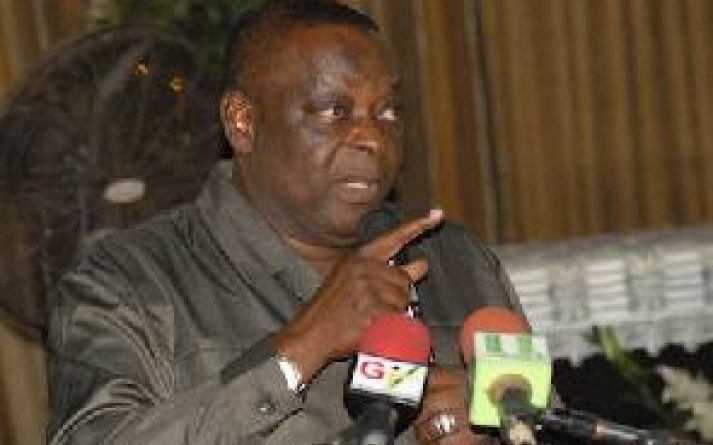 Uncategorized
December 26, 2015 AbbyBallentine 0 Comment Mark Woyongo has warned, Minister of the Interior, next year's elections will not spared

Warmongers who desire plunging Ghana into conflict during next year’s elections will not spared, Minister of the Interior Mr Mark Woyongo has warned.“Anybody who is out there to destroy our country, who is out there to ensure that Ghana goes the way other countries have gone in the area of war and that kind of thing, we should bring that person to book,” Mr Woyongo said in his Christmas message to Ghanaians.“We can only do this if we are working together, cooperating with the security agencies,” he said. According to the Minister, maintaining the peace in the country ahead of and during the November elections next year is imperative, since “there is no other country we can call our own.”“If we have a serious conflict in Ghana, where are we going?” he asked, explaining that since Ghana is bordered by three francophone countries to the east, west and north, it will be “uncomfortable” for any Ghanaian to seek refuge in those neighbouring countries. Apart from the three French-speaking neighbours, Ghanaians’ only option for refuge will be fleeing to the Gulf of Guinea, in case of a conflict, a choice he said was untenable.The Minister’s warning coincides with the recent retrieval of a cache of arms by Police in the Northern Region, and the arrest of seven suspects in connection with the discovery of illicit weapons including two AK47s.Two of the suspects, who were the first to be arrested, led the Police to arrest the five others.None of the weapons retrieved from them had magazines, according to information gleaned by ghnewsnow. The suspects are in Police custody but yet to be charged.The Regional Police Command is conducting investigations to collect water-tight evidence before going ahead to charge and prosecute the seven.The interception of the arms in the Northern Region is the second such incident in less than a month. Police in the Ashanti Region, about two weeks ago, mounted a search for a suspect identified as Abdul Kadri in the biggest arms haul in Alabar, a community in the regional capital, Kumasi.A 72-year-old Burkinabe named Moro Sata was arrested after the Manhyia Divisional Command retrieved a large quantity of arms including 11 AK47 assault rifles, 10 G3 guns, an M15, and other light machine guns from a lair.According to the police, some of the weapons could be mounted on pickup trucks. There were others, the police said, which could be used to shoot down aircraft at close range.Class FM’s Ashanti Regional correspondent Frank Jackson reported that Abdul Kadri Aria, an Ivorian, is believed to be the one who supplies the weapons and ammunition to Moro Sata for sale.Ashanti regional commander DCOP Kofi Boakye, at a press conference on Monday, December 14, 2015, indicated that security officials are on high alert, as investigations proceed. He pointed out that the volume of weapons discovered was alarming, as it could “hold an army for at least six hours unless they use RPG or rocket launcher”.DCOP Kofi Boakye explained that: “This operation started on 30th October where we had an armed robber with some bullets without a gun and we started fishing for where it came from. Per the information, a 72-year-old Burkinabe called Moro Sata was arrested and when his bedroom was searched, these weapons were found.”“Preliminary investigations indicate that he sells some of the ammo locally and also gives some to people outside. Investigations are continuing and we have arrested armed robbers, who, one time or the other, bought these weapons and ammo from Sata,” he added.Mr Woyongo, following the interception of the arms in the Ashanti Region, assured Ghanaians that: “We will step up security in the run-up to the Christmas festivities”.He suggested that more borders be opened with neighbouring countries, as a means of curbing arms smuggling through unauthorised entry points.“We have so many unapproved entry points, we should be seen to be opening more borders and resourcing the people at those borders to be effective,” Mr Mark Woyongo proposed in an interview with Dzifa Bampoe on Joy FM’s News Night Tuesday December 15, 2015.“Another reason [for the proliferation of guns] could be because of the situation in certain parts of the continent. Because of the situation in the sub-region…free flow of arms and ammunition, and because of our porous borders, these arms and ammunition find their way into the country,” he said and proposed an intensification of surveillance and intelligence at Ghana’s borders, conducting of random searches, and occasional use of scanners as well as the provision of incentives to informants, as a means of fighting the smuggling and proliferation of weapons in Ghana.“We appeal to the general public to assist us with information because these people who deal in the guns live with us. We know them and we should be prepared to give them up,” he added.