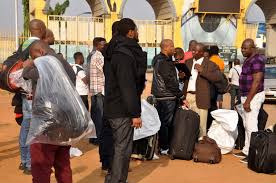 Latest
December 22, 2015July 30, 2016 AbbyBallentine 1 Comment 300 Ghanaians arrested and, deported back to, for various offences are to be, Ghana contrary, incarcerated by, Libyan authorities

About 300 Ghanaians arrested and incarcerated by Libyan authorities for various offences are to be deported back to Ghana contrary to earlier reports they are to be sentenced to death by close of Monday December 21, 2015.

The detainees according to reports have been in prison in a Libyan town called Pejora for the past three months for various offenses against the Libyan law.

Mac Simpson a Ghanaian Teacher living in Libya for more than a decade , told Ultimate News the suspects committed among other things crimes including prostitution, sale of alcohol, improper documentation, stealing and rape.

“It is untrue these people will be executed today. What I have established is that, Libyan authorities are arranging with their Ghanaian counterparts to have these arrested persons deported. It is never true they are due for execution”, he disclosed.

Mac Simpson expressed surprise that news had one viral that the suspects would be killed today when in actual sense there is nothing close to that.

“Most of them tried to use Libya as a transit point to go to Italy without the right documentation which resulted in their arrest. It is not only Ghanaians who are in detention, there are other African Nationals who committed similar offences and are currently suffering same fate”, he stated

It would be recalled how some news portals claimed 300 Ghanaians will be sentenced to death in Libya on Monday, December 21, 2015, if the Ghana Embassy does not intervene.

But checks by ghnewsnow contradict such claims.

One thought on “300 Incarcerated Ghanaians To Be Deported”