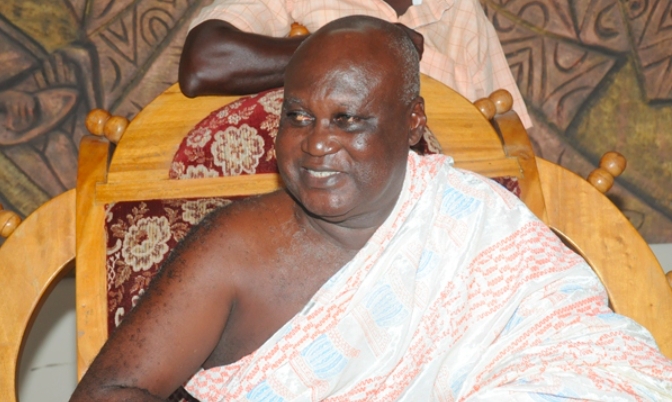 Members of the Sunyani Traditional Council are locked up in a crunch meeting to consider stopping the New Patriotic Party from holding its extraordinary congress in the Brong Ahafo capital.

The decision is prompted by the party’s regional executives’ failure to apologise for remarks made against the Paramount Chief, Nana Bosoma Asor Nkrawiri, which the Council considers unpalatable.

Nana Nkrawiri came under criticism in October from the NPP following his comments to the effect that President John Mahama will win next year’s election in the region with an overwhelming 80 per cent.

At a press conference, the regional executives of the party condemned the comments by the Chief, describing it as unfortunate, unacceptable and a breach of the country’s constitution.

Mr Kwaku Asomah-Cheremeh, the Regional Chairman of the NPP, said: “What we find appallingly and unbelievable is the fact that a 10 -kilometre stretch of uncompleted road could induce a chief of his standing to promise 70 to 80 percent victory in the region for the President.”

He advised the Paramount Chief “not to have appetite for favours from the President at the expense of their subjects. Our chiefs should realize that power is transient and the word impermanence is attached to every sphere of life.”

It said Mr. Asomah-Cheremeh had undermined the authority of the Sunyani Manhene by saying “the Chief stood to the lowest level to call on residents of the region to endorse the Presidency of President Mahama.”

“Currently, the chiefs are in a crunch meeting at the Omanhene’s Palace to take a final decision on the matter,” ghnewsnow can confirm.