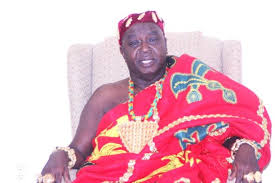 The Adansihene, Opagyakotwere Bonsra Afriyie, has petitioned President John Mahama to cause an investigation into the reason underlining the non-payment of mineral royalties to the Adansi Traditional Council since October 2012.

According to him, the non-payment of the royalties has made it very difficult for the Council to pay its workers, while it has not been able to complement the development role of the Obuasi Municipal Assembly as expected.

Opagyakotwere Bonsra Afriyie made the call through the Vice President Paa Kwesi Amissah Arthur at the inauguration of the Horsey Park Lorry Terminal at Obuasi.

The Chief expressed great worry that in spite of the mining of gold within the Adansi traditional area, especially Obuasi more than 100 years ago, there is very little to show for in terms of the socio-economic development of the traditional area.

Opagyakotwere Bonsra Afriyie said gold and cocoa have remained the mainstay of the Ghanaian national economy since time immemorial.

It is therefore imperative that a significant part of their proceeds be spent on socio-economic development particularly, the areas where these resources are generated to impact positively on the lives of the people.

Touching on health, the Adansihene was worried that the Obuasi municipality continues to be ranked very high on the HIV and AIDS endemic communities in the country adding that the Municipality is currently ranked the second highest endemic district in Ghana.

He appealed to all the stakeholders to help come together to devise a strategy to permanently address the problem.

Opagyakotwere Bonsra Afriyie suggested the training of more Social Service personnel to the hospitals and health care centres to handle HIV and AIDS patients in a manner that will motivate such patients to feel that they are humans and also part of the society.

This, the chief noted, can help to stem the tide of deliberate spread of the HIV by the carriers.