The desperation for potable water by residents in and around Domeabra also known as Mpaha Junction, in the Central Gonja District of the Northern Region has forced them to turn their septic pits meant for toilets into wells.

Abandoned household latrines project initiated by Netherlands Development Organization (SNV) a non-profit, international development organization has become the only surest way residents can get what they described as portable water.

Even though they were given slabs, they could not complete the project on their own after the NGO folded up in the community and its surrounding villages.

Potable water is a luxury for the people in and around Mpaha Junction. Madam Jamila Adam, a sanitary inspector in the district said the people did not have the means to complete the project themselves hence their decision.

She indicated that, the district assembly could take that up the project to ensure residents have places of convenience to help stop open defecation which has become the only way to get rid of human excreta.

A resident, Mr. Yaw Taminu who has also turned his pit into a well, says it’s a blessing in disguise since his household now gets ‘portable’ water from it instead of using it for toilet. S

ince the only hand dugout well in the community is on daily basis contaminated with human and animal excreta.

‘You can see the water is clean, it is not dirty like the dugout. Even this season, rain washes human excreta into it while animal also go in to drink and drop in’. 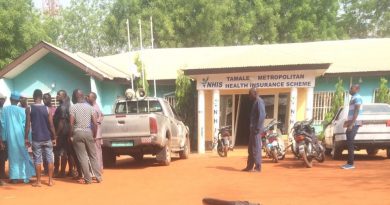