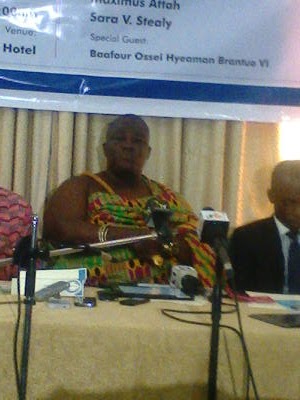 The Manwerehene of Manhyia, Baffuor Osei Hyiaman Brantuo has noted with regret the relatively high prevalence rate of HIV and AIDS in the Ashanti region, compared with the national average.

The 2014 National Sentinel Survey shows that Ashanti region is ranked as the third region with the highest prevalence rate of two-point-three per cent.

Baffuor Osei Hyiaman Brantuo was addressing journalists in Kumasi at a training workshop on HIV and AIDS.

It was organized by the Bukarson Foundation with funding by the U.S. President’s Emergency Plan for AIDS Relief, PEPFAR and aimed at building the capacity of the participants to adequately report on matters relating to HIV and AIDS towards effecting attitudinal change among the populace.

The report revealed that Agormanya in the Eastern region has the highest prevalence of eight-point-five per cent followed by Obuasi in the Ashanti region with six per cent.

The Manwerehene said the situation does not auger well for the image of the region. He however attributed the high rate of HIV and AIDS in the region on factors such as certain cultural practices, mining as well as commercial activities which also attract many people into the region.

Baffuor Osei Hyiaman Brantuo admitted the fact that some of the cultural practices which are inimical to social progress be discontinued through conscientization of traditional leaders.

According to Madam Stealy, patients of the disease are still being victimized against, while there is a reported shortage of the Anti Retroviral Therapy for the management of the pandemic in Ghana.

Madam Stealy therefore entreated the media to help to cause behavioural change among the people.

About the HIV Sentinel Survey

The annual HIV Sentinel Survey is a study of the prevalence rate of HIV and AIDS among pregnant women attending antenatal clinic.

The result then becomes the primary data for the national HIV and AIDS assessment. The Sentinel has since 1992 provided the strategic data about the actual trend of HIV and AIDS infection in Ghana.