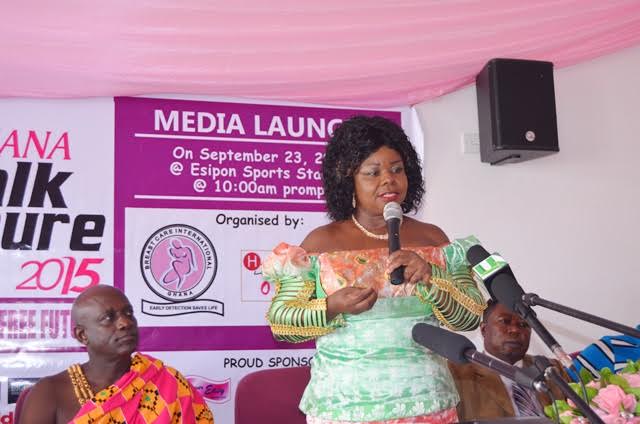 According to her, due to the lack of education about the disease, many women find it very difficult to detect early signs of infection and seek for medical care.

“The intriguing aspect is that lack of breast cancer awareness and education tops the list of reasons usually assigned for the delayed presentation among women in Ghana.

“Breast cancer is a highly treatable, curable and survivable disease if diagnosed early but it is sad to state that about 60% of Ghanaian women who are diagnosed with breast cancer are usually found in the advanced stages of the disease,” she said at the media launch for the Fifth BCI Ghana walk for the cure at Takoradi on Wednesday.

In that same year, 2,260 women were diagnosed of breast cancer in Ghana.

The above mentioned challenge, Dr. Wiafe Addai noted, informed her organisation’s decision to organise the yearly walk event aimed at raising awareness about the disease.

She said the event also presents her and her team the opportunity to educate the people about breast cancer.

This year’s event is scheduled to take place at Sekondi-Takoradi on October 30, 2015 under the theme “Fighting for a Breast Cancer-Free future”.

The event, she said, will focus on the youth. About 30,000 students across the twin-city are expected to join the walk in search of a cure for breast cancer.

Several international participants are also expected to join the walk.

Speakers at the event will dwell more on preventing untimely death from breast cancer and showcasing survivorship.

The walk which was initiated in 2011 by BCI is the country’s largest and most successful awareness raising event for breast cancer.