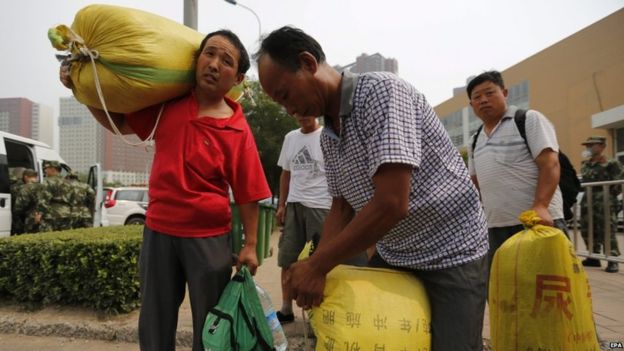 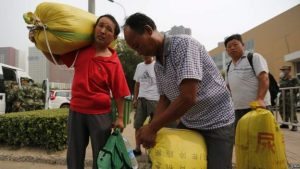 The Chinese authorities have ordered the evacuation of residents within a 3km radius of the Tianjin blast site over fears of chemical contamination.

The evacuations came after an apparent change in wind direction, and as police confirmed the highly toxic chemical sodium cyanide was found near the site.

Eighty-five people are now known to have died in the giant blasts in the north-east Chinese port on Wednesday.

Latest pictures of the aftermath

People sheltering at a school used as a safe haven since the disaster have been asked to leave wearing masks and long trousers, reports say.

The order came after the wind apparently changed direction, prompting fears that toxic particles that would have previously been blown out to sea could be blown inland.

The People’s Daily newspaper tweeted that they had been sent to handle highly toxic sodium cyanide which had been found there.

The discovery was confirmed by police “roughly east of the blast site” in an industrial zone, state-run Beijing News said.

Officials had until then only confirmed the presence of calcium carbide, potassium nitrate and sodium nitrate. Calcium carbide reacts with water to create the highly explosive acetylene.

Officials have so far insisted that air and water quality levels are safe.

Some fires have continued to smoulder and at least one reignited on Saturday. Xinhua said several cars at the site had “exploded again”.

Of the 721 people injured, 25 are in critical condition and 33 are serious.

At least 21 firefighters are among the dead and an unknown number remain missing.

Dozens of relatives of the missing tried to disrupt a news conference given by officials on Saturday, demanding to know the fate of their loved ones.

“We have gone to each and every hospital by ourselves and not found them,” Reuters news agency quoted Wang Baoxia, whose elder brother is missing, as saying.

“There is no government official willing to meet us. Not even one.”