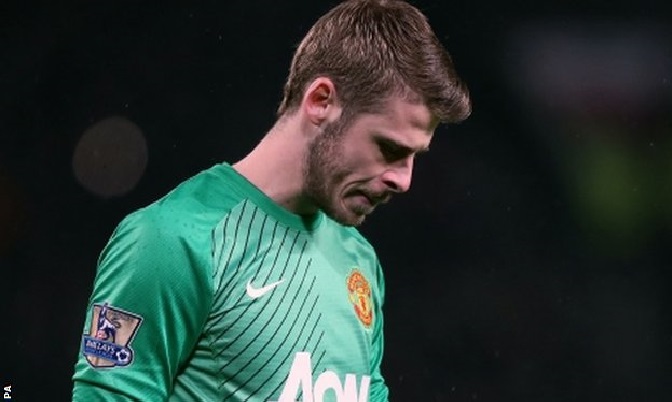 Manchester United goalkeeper David De Gea told club staff he was “not eager to play” before being left out of the opening game of the season.

Manager Louis van Gaal will not pick the Spain international, 24, until the transfer window closes amid speculation linking him with Real Madrid.

De Gea has again been left out of the United squad for Friday’s Premier League game at Aston Villa (19:45 BST).

“I’m not doing everything alone,” said Van Gaal. “I have two assistant coaches and a goalkeeping coach, Frans Hoek.

“Frans had a meeting with David De Gea. He fully agreed with our decision.”

Van Gaal said he and his staff had watched De Gea in training and the former Atletico Madrid player was “not the same as before”.

The Dutchman’s observation about De Gea’s state of mind came during an unexpected exchange after his news conference on Thursday.

Having chided a journalist for not being aware of his previous comments about De Gea, Van Gaal sought him out once he had finished answering questions and the pair spoke for a couple of minutes.

He told The Times’ Tony Barrett: “Frans Hoek, he has a meeting with David de Gea and he asks him, ‘Do you want to play?’.”
When the reporter asked about De Gea’s reply, Van Gaal said it was: “No.”

The club later moved to clarify those comments, issuing a statement which read: “The manager wants to clarify that the direct answer from David was not ‘no’, David was not eager to play because of the situation and because he was not 100% focussed due to all the rumours surrounding him.”

United are adamant they will not sell De Gea, whose contract expires at the end of the season, unless they receive a world-record fee from Real or get defender Sergio Ramos in exchange.

Van Gaal had earlier said Barcelona forward Pedro fits the template of a quick, penetrative player he is still looking for.

The 28-year-old Spain international, who has been heavily linked with a move to Old Trafford, is said to have told Barca he wants to leave.

“You have to ask Pedro, not me,” said Van Gaal. “I don’t mention anything before he has signed. When he has signed I come to you and say: ‘Hey, Pedro is here.’ That is not the case and we shall wait and see.”