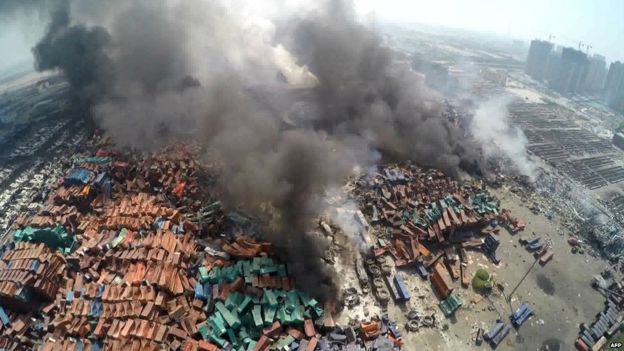 Fires are still burning at the site of two massive explosions in the Chinese city of Tianjin, some 36 hours after the blasts.

A team of military chemical experts is testing for toxic gases at the scene and rescuers have been ordered to wear protective clothing, state media said.

At least 50 people died and hundreds were injured, 71 critically, in the explosions on Wednesday evening.

Meanwhile, search teams found a survivor in the debris on Friday.

Officials said earlier that 17 firefighters were among the dead and China’s Ministry of Public Security added that, as of Thursday afternoon, 18 others were still missing.

Tianjin’s fire chief Zhou Tian told reporters on Friday that more than 1,020 firefighters and 140 fire engines were still battling flames at the scene.

Fire crews were already at the scene when the explosions took place, having been called to reports of a container fire.

The hazardous goods warehouse that exploded in the port area is owned by a company called Ruihai Logistics, which reportedly handles toxic chemicals including sodium cyanide.

But city officials said on Friday they still did not know what materials were at the warehouse, or what the cause of the blasts was.

Gao Huaiyou, deputy director of Tianjin’s work safety watchdog, told reporters that there were major discrepancies between the accounts of company managers and customs officials. He said damage to the company’s office also made it difficult to identify the chemicals.

But officials said the site had been sealed off and, as far as they knew, any contaminants were contained in that location.

The BBC’s John Sudworth in Tianjin says that once the fire had been extinguished, the plan is to drag the chemical containers to a safety zone, away from the heat, so that the contents can be then be analysed.

But Tianjin’s residents remain nervous, he adds, with some posting concerns online about the environmental impact and suspicions that the public may not be hearing the full truth.

Fires were still sending plumes of smoke over the destroyed buildings, burned out vehicles and crumpled shipping containers that bore the brunt of the explosions.

More than 3,500 residents made homeless by the blasts spent the night in temporary shelters.

The People’s Daily, the official newspaper of the Chinese Communist Party, said that emergency services were “trying to remove all the 700 tons of sodium cyanide” stored at the site.

The paper said that hydrogen peroxide had been prepared to detoxify the chemical.

It added that the facility’s construction “clearly violated” safety rules.

“It would be harmful if you breathe in [this toxic air] for a long time,” he said.

“But at present, it has not exceeded [the standard] too much based on our monitoring.”

Water discharge points to the sea had been closed, he said.

The Tianjin Port Group Company said dozens of its employees were unaccounted for, Xinhua added.

The two explosions, seconds apart, caused a fireball visible from space and a shockwave that smashed windows several kilometres away.