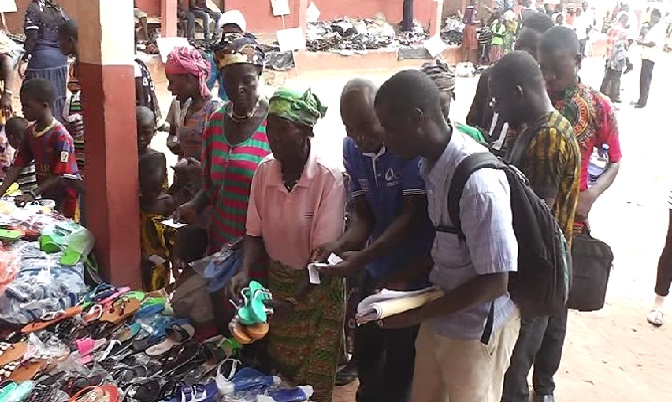 A survey conducted by Catholic Relief Services, CRS, has indicated that access to footwear is a luxury for  the people of Litani, Ticheritaba and Langbina in the East Mamprusi District of Northern Region.

In these areas, residents only use footwear during festivities and other special occasions to but not on daily bases.

This was revealed by the Head of programmess, Madam Kreek Melissa of the CRS, when the under-privileged residents in rural Ghana, were presented with different types of footwear through the volunteer for footwear distribution programme at Litani.

A total of 2,100 people from the communities benefited from the package.

The CSR gave out coupons ranging from GHC 20 to 30 to each person to buy a number of footwear worth that amount.

Local footwear sellers from Walewale, the district capital were brought to Litani with their wares to enable the people buy the footwear of their choices to empower them financially.

Madam Melissa said her outfit recognized the level of negative impact that soil transmitted infections has on students and women in the rural areas and decided to embark on the programme as part of their hygiene and sanitation projects.

She pointed out that soil transmitted infections “are serious contributory factors to anemia in children and women of reproductive age and also manifest in skin infections.”

The Head of programmes also said that walking bare-footed also retard growth of children because of fungus growth in them “which has negative impact on overall development and wellbeing of children.”

She was of the view that the programme will help expand access to the use of footwear and also sensitize the community members on its importance during their daily activities.”

The Coordinator of head Health Education, Hajia Azara Issahaku, appealed to the beneficiaries to ensure that they use the footwear every day adding that “the world has passed the stone age period where walking barefooted was the order of the day.

The District Coordinator of CRS, Mohammed Ali, said her outfit has provided services to the poor and the vulnerable in rural communities in the country especially in sanitation, hygiene and nutrition for the educational sector in the past decade in Northern and Upper East Regions where poverty level is high.

He said they will monitor the wearing of the footwear especially among the school children.

The Chief of the area, Na Bazibgiya Punpumrigi who was a beneficiary, expressed his appreciation to CRS for their good gesture, saying that he will use the “special canvass pair of shoes on special occasions and the sandals for his daily wear.”

He told TV3 that he will ensure that his people use the footwear to encourage CRS to do more for them.