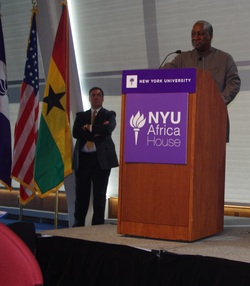 Ghana’s president John Dramani Mahama says he is not taking the supposed terrorist threat on his country lightly. President Mahama was speaking at an event organized in his honor by the New York University (NYU) at the Kimmel Center in Manhattan, New York on Friday September 27.

In a reaction to questions from the audience, President Mahama acknowledged the role Ghanaian troops played in pushing the coalition of rebel forces out of the West African neighbor, which has been cited as the main reason for the alleged threat.

Last week, the British Foreign Office issued a warning to its citizens of possible terrorist attacks on Ghana as a result of the country’s military participation in Mali. According to the release, attacks could be indiscriminate, including in places visited by expatriates and foreign travelers.

President Mahama attributed the alleged threat to the US and the other western countries tightening their security. “As countries like the United States homeland security tighten the security of your nations, terrorists are looking for softer targets, and what softer targets can you find than African countries who for years have shifted more of our spending into social services…and have neglected defense spending” he said.

Ghana sent about 120 soldiers as part of the joint AU forces that backed French troops to fight Islamist militants in Mali. The government also made a financial pledge of $3 million to support the African-led force for Mali (AFISMA) and is operating an aviation unit there under a United Nations air services contract.

President Mahama who took time off to attend the event on the sidelines of the UN General Assembly in New York however assured that Ghana is prepared to defend its territory against terrorist aggression. “With what is happening in the world it means that if you must protect your democracy you must be vigilant too and so we are going to have to factor that into consideration and make sure that we are on our guard for any such things as have happened in Kenya”.

He also condemned the Kenyan incident and expressed condolences to those affected.